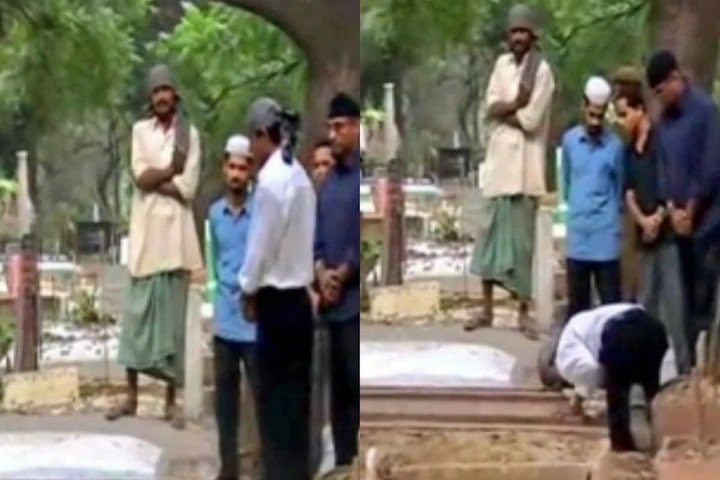 Bollywood actor Shah Rukh Khan often gets emotional by remembering his late Ammi-Abbu. Shah Rukh Khan, known worldwide for his values, has many properties across the world, but the place where Shah Rukh Khan gets the most comfort is in Delhi. And this place is the grave of Shahrukh Khan’s parents, where King Khan is often seen prostrating. In fact, whenever Shahrukh Khan comes to Delhi, he definitely adorns the tomb of his parents. Some of the latest pictures of King Khan have been seen on social media, which are becoming viral very fast.

Shah Rukh Khan has told many times in his interviews that he worships his parents in this way. Seeing these pictures of Shahrukh Khan on social media, his fans are getting very emotional and are lavishing lots of love on him in the comment box. In the picture you can see that Shahrukh Khan is prostrating on the tomb and some people are also seen around him. These pictures of him are becoming very fast on Instagram.

Let me tell you that Shah Rukh Khan also said in one of his interviews, “Whenever I leave for Delhi, I feel in my heart that my mother and my father are here. I would have come to meet them on their crub.” People say that now I have become a Delhi one, not a Mumbai one, but how do I tell them that I can never leave Delhi and Delhi, because my father and mother are here. ”

Keep telling that the name of Shahrukh’s father was Mir Taj Mohammad Khan. He was a freedom fighter and a chief engineer by profession. While Shahrukh was in college, his father died due to cancer. At the same time, her mother’s name was Latif Fatima, her mother died in the year 1990.

Talking about the work front, Shah Rukh Khan is in the news these days for his upcoming film ‘Pathan’. This is Shahrukh’s first since the film ‘Zero’ in the year 2018. In such a situation, after such a long break, the fans are eagerly waiting for their film.