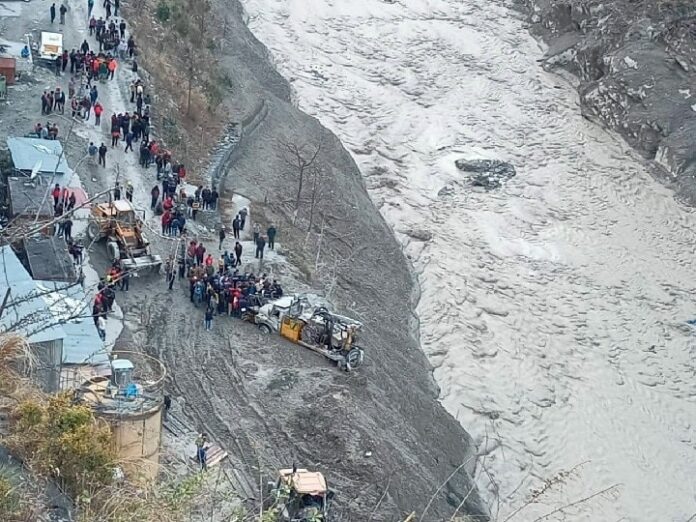 New Delhi: After the devastation in Uttarakhand, relief and rescue work is going on. At the same time, some people are still trapped in the tunnel. Excavators and Pokeland machines have been installed to open the tunnel. Light is being installed at night to release the rescue. In fact, in the Tapovan area of ​​Chamoli district, the Rishiganga river was flooded due to the breaking of the glacier at around 10 am on Sunday. In which the assets of the Tapovan area including property and property have suffered heavy losses due to the overflowing of the Rishiganga power project and the Tapovan power project. On receiving the information, the district administration immediately issued an alert in the river banks of the district. The areas of the riverbank area were evacuated by the district administration and on the spot the rescue operation was started with the help of local people including the district administration, police, SDRF, ITBP, Army.

At the same time, a road bridge connecting Niti Valley near Raini has been washed away. Due to which contact of about 7-8 villages has been lost. Which includes villages like Gahar, Bhanguel, Raini Palli, Pang, Lata, Suraithota, Tolma, Fagarasu etc. Jugju’s swing bridge, Juvagwad-Satdhar Jhulapul, Bhaguel-Tapovan Jhulapul and Pang Muranda bridge have been washed away in the rainy. Shivji in Rani and Maa Bhagwati temple in Jugju have also been washed away in the disaster.

It is being told that 35 to 40 people were working in the Rishiganga power project at the time when this flood occurred. While Tapovan Power Project has 178 workers. On Sunday, 116 people were working in Tapovan. Till now 12 people have been properly saved. While seven deadbodies have also been recovered so far. Rescue operation is currently going on. At the same time, about 154 people are being reported missing.

Chief Minister Trivendra Singh Rawat conducted a terrestrial inspection of the disaster affected area in Rani and Tapovan. He asked to speed up the rescue operation to save the people trapped in the tunnel. Inspecting the disaster affected area in the same rain, said that our effort will be that people who are trapped due to loss of road connectivity, help will be provided to them as soon as possible.

At the same time, the Chief Minister said that the affected people should be given compensation of four lakhs each. The Chief Minister said that we have complete system to fulfill every need. We have adequate quantity of rescue team, medical, helicopter, experts. The entire focus of the government is on those whose lives can be saved. District Magistrate Swati S Bhadauria, SP Yashwant Singh Chauhan were also present on the occasion. DGP Ashok Kumar also inspected the disaster affected area Tapovan.

Rescue operation is going on at the spot under the guidance of District Magistrate Swati S Bhadoria. Here the work of removing debris from the tunnel is going on by installing Pokeland machine, excavator and JCB machine. At the same time, the District Magistrate has made arrangements for quick logistics and necessary support to the stranded people due to the breakdown of the contact route. Through the district administration, all the necessary arrangements have been made along with food packets, water etc. The entire team of the district administration is present on the spot.