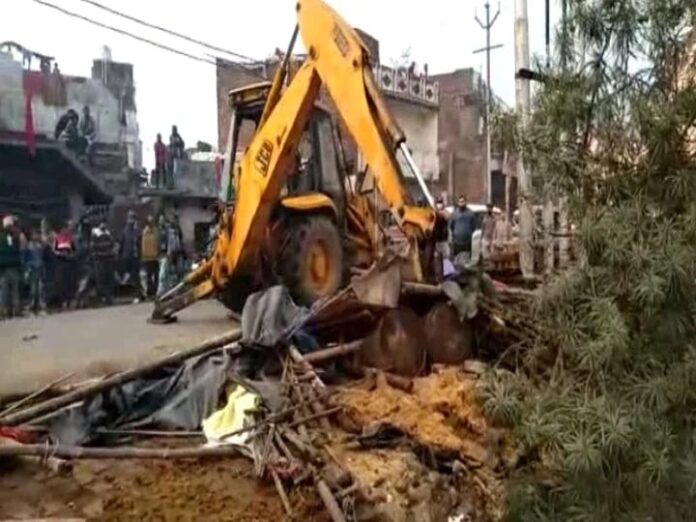 Gorakhpur: The team of Municipal Corporation Enforcement Team is continuously engaged in destroying the encroachments on the roadside. This time, the team has taken action against the people living illegally by putting up a slum on the banks of Lal Diggi Park in Rajghat area. The team of the enforcement team drove the bulldozer and cleared the road and drain along the boundary of the park with illegal occupation.

Slum hut was built close to the boundary of the park

The team of the enforcement team of Gorakhpur Municipal Corporation conducted an encroachment drive on Tuesday near Lal Diggi Park in Rajghat area. Sanitary Inspector Ram Vijaypal had earlier noticed the encroachment adjacent to the boundary of Nehru Park during inspection. He found there that many people living near the boundary of Nehru Park have been living there for years by putting up a slum. Some people were also illegally running a cowshed adjacent to the western wall behind the park. Those who do not obey even after repeated refusal and warning.

In the government of UP Chief Minister Yogi Adityanath, the district administration of Gorakhpur is serious about encroachment. So the Municipal Corporation also does not want to take any kind of any kind. In such a situation, the team of municipal enforcement team has taken this action keeping in mind the beautification of the park. In such a situation, the beauty of the park will remain. So the people who illegally encroach there will also learn.