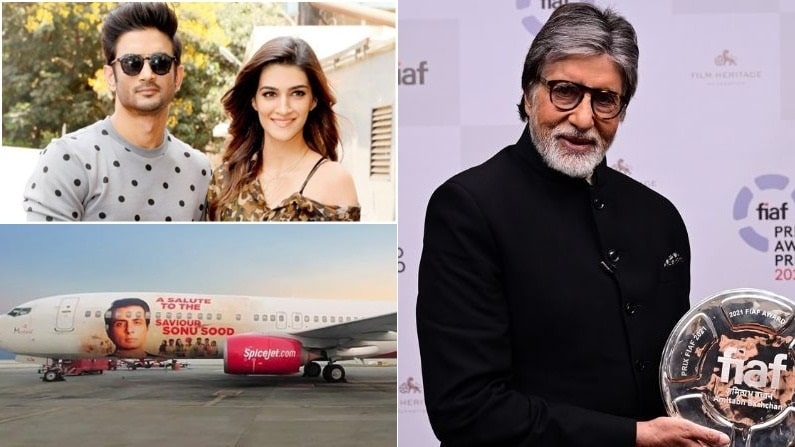 The best actor of Bollywood, Amitabh Bachchan, is once again in the discussion. Yes, Amitabh Bachchan has been honored with the prestigious International Federation of Film Archives Awards (FIAF). On Friday evening, Hollywood filmmakers Martin Scorsese and Christopher Nolan presented the awards at a virtual event. Let me tell you, Amitabh Bachchan is the first Indian to be awarded this award. Every year, people associated with the film industry are honored in this function, who help to save things related to the film in some way or the other.

Amitabh Bachchan has shared the pictures on his Instagram. With this, he wrote – ‘I feel very honored for the FIAF Award 2021. Thanks to the FIAF and Martin Scorsese and Christopher Nolan. Our commitment to saving India’s film heritage is unwavering. The Film Heritage Foundation will continue its efforts to create a nationwide movement to save its films. ”

Kriti Sanon finally broke her silence on Sushant’s death, why did not you talk about the actor

Sushant Singh Rajput passed away in June last year. There was a very good bond between Sushant and Kriti Sanon. After Sushant’s death, many questions were raised by the actor’s fans on Kriti’s silence. Now Kriti has given her reaction on this matter. Kriti said, ‘There was so much noise at one time that I do not want to be a part of it. There was a point that too much negativity had taken place and I did not want to be a part of that negativity.

Kriti further said, ‘I knew what I was feeling in that situation and I wanted to keep it inside myself. I did not feel right that I should tell anyone what I am feeling. Apart from this, you can say what you want to say on social media. You can express yourself by writing there.

After Shah Rukh Khan, KRK confronted Akshay Kumar, wrote “Actor has only 2 to 3 years left”
Bollywood player Kumar i.e. Akshay Kumar is in the discussion about his upcoming films these days. Many big films of Akshay Kumar are going to be released this year. Where Akshay Kumar is constantly moving forward announcing his films. In such a situation, now Bollywood’s famous critic and actor Kamal Rashid Khan aka (KRK) has now tweeted against the actor.

KRK tweeted a while back and wrote, ‘There is no buyer present to buy Akshay Kumar’s films. His films like Suryavanshi and Bellbottom are not being released. But he is announcing a film every month and is shooting 24 * 7. Because they know that they have only the next two-three years left to earn money. Crazy producers are giving them around 125 crore rupees.

In the lockdown, Sonu Sood came forward as a messiah for the migrants. He is still not back from helping anyone. He helped millions of people to reach their homes. He is still helping people without stopping. Everyone praises this noble work of Sonu Sood. Now the airborne company Spyjet has given a special tribute to Sonu Sood. The video of which he has shared on social media.

SpiceJet has put a big photo of Sonu Sood on its company’s Boeing 737. Also written – A Salute to the Savior Sonu Sood. The picture of this flight of SpiceJet is becoming viral on social media. Sonu Sood has also shared an emotional video of this flight.

Controversy: In the troubles faced by Ram Gopal Varma’s ‘D Company’, FWICE demands a ban on the release

Fans of Ram Gopal Varma’s film D Company are eagerly waiting. The film was going to be released on 26 March. But now the release date of this film has been extended. About which Ram Gopal Varma will announce soon. But along with this, there is a demand to ban the release of Ram Gopal’s film. The Federation of Western India Cine Employees has sought to stop the release of D Company. This demand is being made due to the non-payment of the outstanding money of the crew.

FWICE has written a letter to UFO Movies and has stated in it that Ram Gopal Varma has not yet given 12 crore rupees to the people of South Industry. The film should not be released until he pays the dues. According to reports, Ram Gopal Varma has given Rs 12 crore to poster printing, poster pasting, fighter union, production union, exhibitors and distributors. Whenever he asks for money from the filmmaker, he gives the next date and many of his checks have also bounced. Now the union has demanded to stop the release of the film.