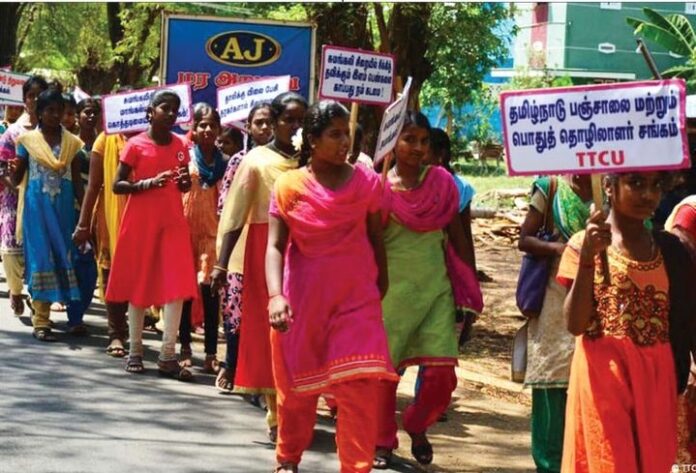 From Deutsche Valle. Around 1.2 crore people in the country work in the garment sector, mostly women. But women working in garment factories hardly get a break to go to the toilet. The murder of a 20-year-old woman who works in a Chennai garment factory has revealed many dark truths.

On January 5, the body of a 20-year-old woman working in a textile factory in Chennai was found. The factory manufactures clothing for global fashion retailer H&M. After the girl’s body was found, more than two dozen women working in the factory came forward and all complained of sexual misconduct.

According to police, the accused of the murder is a factory worker who has been arrested. H&M is under increasing pressure to cancel the contract with the supplier. H&M, a company selling clothes in the US and Australia, along with Asian, European countries, has asked for a third independent party investigation.

The company has stated that any future relationship with the supplier will depend on the outcome of the investigation. But no misconduct will be tolerated in factories.

Normal case in the eyes of police

Police are describing the murder case as a love affair. “Our investigation shows that the boy and the girl were in a relationship and differences between the two are the reasons for the murder,” a police officer told Reuters on condition of anonymity.

According to the police officer, no employee of the garment factory or his union has ever complained of sexual misconduct before. But local human rights groups say many women have made such complaints.

Nandita Shivakumar, India Coordinator of Asia Floor Alliance, an organization working for the interests of garment employees in India, said that the woman had told her mother and her co-workers about the abuse.

Nandita says, “At least 25 other employees told us what kind of misbehavior they have in the factory. We feel that big brands have failed to create an environment in which employees can complain. ‘

India’s garment industry is worth several hundred million dollars. For a long time, Tamil Nadu’s garment industry was accused of child labor. Now cases of sexual abuse and abuse are coming up. According to organizations fighting for labor rights, big brands pressurize suppliers to make cheap clothes faster. Suppliers apply this pressure on their employees and eventually a situation arises in which they are not even allowed to go to the bathroom. Verbal and physical sexual abuse also happens.

Fear of revenge versus the law

The law enacted in 2013 says that wherever 10 people work, there should be a grievance committee headed by women. This committee should have the authority to impose a fine on the misdemeanor or to expel him from his job.

Nandita Sivakumar says, ‘In most cases there is a fear of retaliation and in some cases there is a lack of awareness about how to use this law. Something similar happened in this Chennai factory. Verbal complaints were made to factory supervisors, but they were not taken seriously.