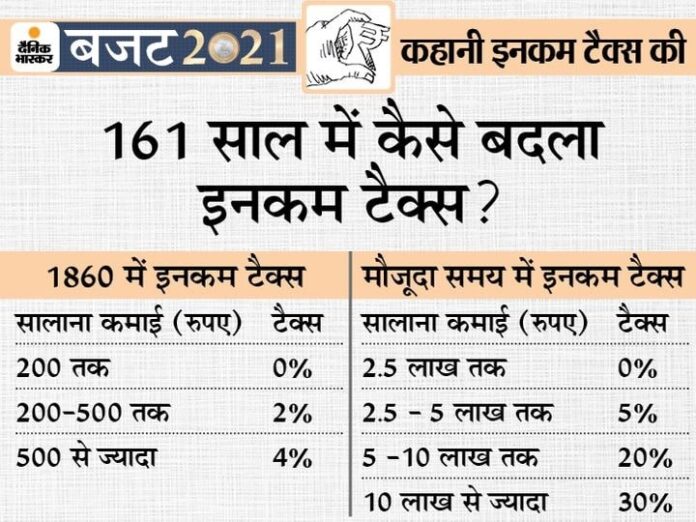 In 1860, the tax was levied on the earning of more than 200 rupees,
in the first budget of the country, there was a provision of tax on the annual income of Rs 200 to 500 rupees. A provision was made to levy 2% tax on those earning more than Rs 200 annually and 4% on those earning more than Rs 500. Army, Navy and police employees were exempted from income tax law. However, most of the workers at that time were British. The annual salary of an army captain was Rs 4,980 and that of a naval lieutenant was Rs 2,100. However, the income tax law was strongly opposed at that time. The then Governor of Madras Province, Sir Charles Tavelian, also protested. Wilson’s law was similar to Britain’s income tax law. In Britain in 1798, the then Prime Minister William Pitt also enacted an income tax law to cover the expenditure of the army.

The British Government began to rule in India in 1858, the
East India Company was ruled in India in 1857. Indian soldiers revolted against the British. This sparked agitation across the country. To deal with this, the British increased their army’s expenses by a significant amount. In 1856–57, the British had spent £ 14 million on the army. In 1857-58, this expenditure was increased to £ 2 million. At that time 1 pound was equal to 10 rupees. On November 1, 1858, the then Queen Victoria of Britain announced that now the British government would rule India. At the same time, ‘The Government of India Act 1858’ came. According to the provisions of this law, control of all economic affairs of India came into the hands of the first Secretary of State, Charles Wood.

If the British suffered a loss in
the revolution of 1857 , then the imposition of income tax , the debt of England reached 185 million pounds in 1859 due to the revolution of 1857. Britain sent James Wilson to India in November 1859 to deal with this problem. Wilson was the founder and economist of the Chartered Standard Bank of Britain. He was made Finance Member (Finance Minister) in the Council of Viceroy Lord Canning in India. Wilson presented India’s first budget on 18 February 1860. In the very first budget, for the first time three taxes were proposed. First- income tax, second- license tax and third- tobacco tax. While announcing these three taxes, Wilson gave an example of Manusmriti, saying that his move is not ‘Indian’ but ‘Indian’ only.

James Wilson
James Wilson , the founder of The Economist magazine, was born on 3 June 1805 in the Hoick village of Rockshire Parganas in Scotland. James was the fourth of 15 children of his parents. James was born in poverty. James and his younger brother William then started a hat-making business that was initially successful. The two brothers later started work in London, but could not last long and had to shut down the company. James then started ‘The Economist’ magazine and became its editor-writer. In 1844 James invested all his earnings in The Economist. ‘The Economist’ is still counted among the most popular magazines in the world. In July 1860, eight months after his arrival in India, James became ill. He died on 11 August 1860 due to illness.

The new Income Tax Act came in 1922, only after it became the Income Tax Department.

How much income tax changed during the era of which finance minister?