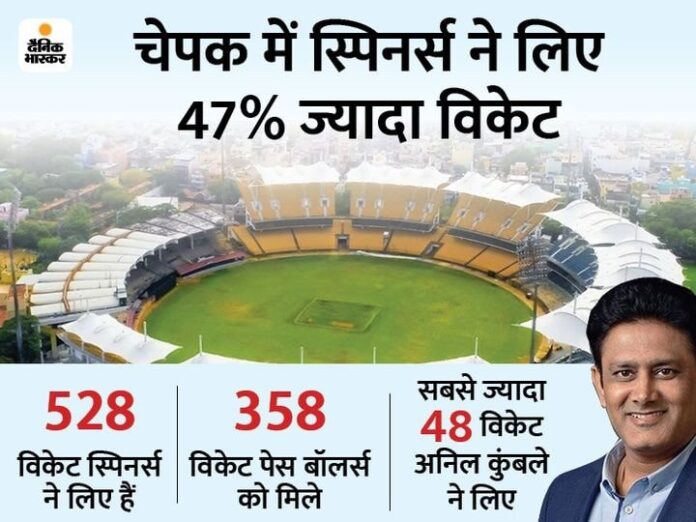 The first two matches of the four-Test series between India and England will be played at the M. Chidambaram Stadium in Chennai. Team India has just come to beat Australia on Australia’s bouncy pitches. In such a situation, it will be interesting to see how the mood of Chepak’s pitches. However, looking at the record of the Test matches held so far, the Chennai pitch has generally proved more favorable to the spinners.

Ravindra Jadeja is ahead of Ravichandran Ashwin here, when Jadeja is more successful than Ashwin. Jadeja has taken 15 wickets in two Tests at Chepak. At the same time, Ashwin has taken 13 wickets in two Tests. Ishant Sharma has taken seven wickets in three Tests here.
There are 914 wickets in the name of spinners all over the country,
it is not that only the Chepak Stadium in India is dominated by spinners. The situation has been almost the same in the whole country. In Test cricket, all types of bowlers on Indian soil have taken 7,820 wickets. Among them, the spinners have taken 4,283 wickets and the pacers have taken 3,369 wickets. 168 wickets have been given to bowlers who are not clear whether they were spinners or pacers. That is, spinners in India have taken around 28% more wickets than fast bowlers so far.
The Indian bowlers have more dominance of spinners and
now talk about the performance of Indian bowlers on Indian grounds. Indian spinners have taken 2,772 wickets in Test cricket at home grounds. At the same time, the pacers have taken 1,284 wickets. That is, Indian spin bowlers in Indian grounds have taken 115% more wickets than fellow pace bowlers.
Two pitches have been prepared for the first test, Kohli will make the final decision
The Tamil Nadu Cricket Association has prepared two pitches for the first Test starting in Chennai on 5 February. A pitch is made entirely of red clay and a pitch is made of a mixture of red and black soil. Curator V. Ramesh Kumar has claimed to be the ideal pitch for the Test match. That is, the fast bowlers can get help here on the first day. On the second and three days, the pitch will be batting friendly. The spinners will get more help here on the fourth and fifth days.
Other experts are telling that one pitch batting friendly and the other pitch spin friendly has been made here. Captain Virat Kohli has to decide on what kind of pitch they want to face England.