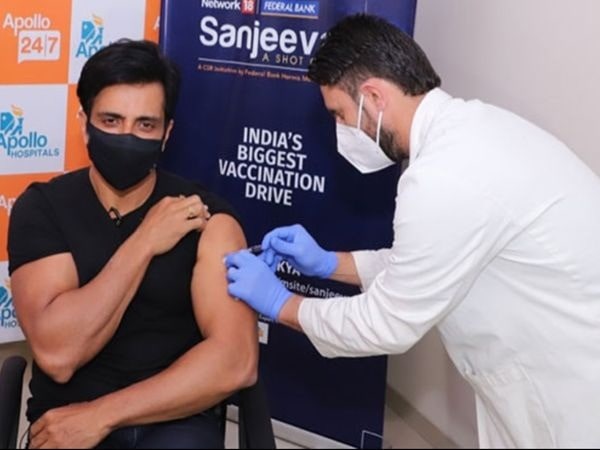 Mumbai: 47-year-old actor Sonu Sood got Corona vaccinated in a hospital in Amritsar city of Punjab on Wednesday and then shared a picture on Twitter and informed people about it. But Sonu Sood has not only taken the first dose of the vaccine, but he has also started a campaign to make the common people aware to get the vaccine.

Sonu Sood started his unique campaign from the Attari border of India-Pakistan where he met the soldiers today. In fact, Sonu Sood, who achieved the status of Messiah by helping millions of laborers trapped across the country to their homes during the lockdown last year, started a campaign to spread awareness among people about 4890 villages across the country to get the Corona vaccine I went among the soldiers.

On this unique initiative regarding vaccination, Sonu Sood told ABP News, “There are so many villages around Gunter, Indore, Amritsar, Nashik and all such cities across the country, where people are getting scared due to taking the vaccine. We are all such We will go to the villages and request people to get the vaccine. The cost of getting the vaccine will be borne by us and in this way our security system will be ours. I started this campaign from the Attari border in Amritsar. “

Sonu Sood said, “I wanted to start this kind of campaign because I want to spread information about vaccination to those people who are currently wondering whether they should get the vaccine or not. Should be inspired to apply the vaccine to those who are eligible to apply it. “

Sonu Sood said, “We will also organize a camp on this. We are starting this as a campaign, so that people can get information and confidence about the vaccine.”