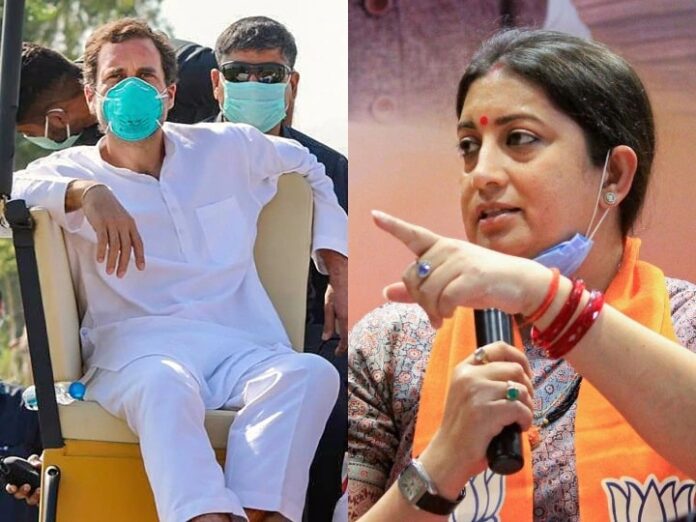 New Delhi: The BJP on Friday accused former Congress President Rahul Gandhi of insulting the tricolor and supporting the chaotic elements who are trying to break the country and said that he wants the law and order in the country to be broken. Union Minister Smriti Irani also slammed Rahul Gandhi for not condoning the policemen injured in the tractor parade of farmers on 26 January.

He said, “Rahul Gandhi today announced that the violence that the country saw on 26 January, the same violence … Rahul Gandhi believes that soon the public will be able to see every city of the nation.”

Smriti Irani said that for the first time in India’s politics, instead of invoking peace, a leader was seen invoking the chaotic elements how to set fire to the country. He said, “Today the disgusting face of Rahul Gandhi, who stands with chaotic elements, has been presented to the nation.”

Let me tell you that Rahul Gandhi said in a press conference today that in the coming time the farmer movement will spread from villages to cities and the solution is that the government should withdraw all the three laws.

He appealed to the countrymen that Rahul Gandhi’s plans would have to be thwarted together. Irani MP from Amethi said that the country will never forget the sight of the country on the streets of the capital Delhi on January 26, in which more than 300 Delhi Police personnel were injured.

He said, “Many media persons were attacked. Even attempts were made to surround and kill women policemen. The nation will not forget that scene, when an attempt was made to kill police and media personnel with a tractor.

He said, “But today words of consolation for not a single injured policeman came out of Rahul Gandhi’s mouth. Not a single word of condolence could be heard for a single media person who was attacked by Rahul Gandhi.

Earlier, Rahul Gandhi alleged that the government is trying to intimidate and intimidate the farmers. The Congress leader said that this movement is not going to end and in the coming time it will spread from villages to cities. He said, “We want a solution.” The solution is to withdraw the laws.

It is worth noting that the farmers’ organizations have been agitating on the various boundaries of Delhi for the last about two months regarding the three agricultural laws. His talks with the government so far have failed.