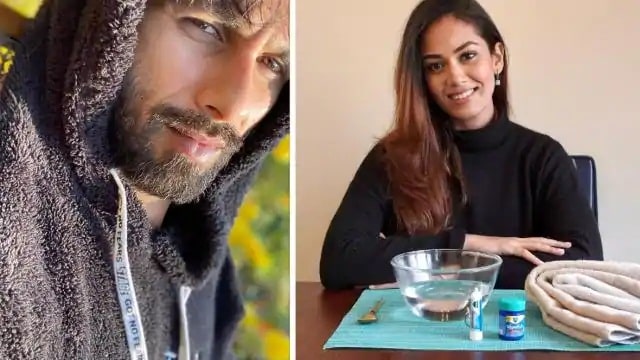 Shahid Kapoor And Mira Rajput Live In This Seaside House Of 58 Crores, Just Have A Glimpse: Shahid Kapoor and Mira Kapoor are one of the most loved couples of Bollywood. A few days back, the duo had revealed that they have vacated their Juhu apartment facing the sea to move to a luxurious Three Sixty West in Worli along with their two kids- daughter Misha and son Zain. His new home has a spectacular view of the Bandra-Worli sea link. Shahid and Mira had booked the apartment in 2018 and got possession in 2019. The couple has now shifted to the base of their new apartment.

Shahid and Mira’s luxury home
Now, Mira Rajput took to her social media handle to share a glimpse of her new luxurious Worli home. On his Instagram, he captioned the post, ‘Who knows? Is this the beginning of something wonderful and new?’ She is seen wearing a white colored dress and looks beautiful as ever. Meera is sitting inside a drawing room, which has gray walls and furniture.

Mira Kapoor’s Piano Practice in New House
Earlier, she recently shared a new video, in which she was seen practicing piano and it seemed that it was taken inside her new house.

Talking about the apartments of Shahid Kapoor and Mira, who are fond of balcony
, Pinkvilla’s source further said, ‘Shahid and Mira were shifted to their posh sea-facing Worli house with their two kids for five days. are gone. He did a small puja a few days back and started living there. Mira and Shahid took a keen interest in the interiors of their dream home.

The house is worth so many crores,
he further said, ‘The epidemic affected the construction of his house a lot, but now that all the work has been completed. Known for his luxury cars and bike collection, Shahid Kapoor has been given 6 parking slots at 3 Sixty West. The actor’s love for balconies will also be seen in his new Worli home which has a 500 sq ft balcony.’ Let us tell you that the price of this house is around 58 crores.