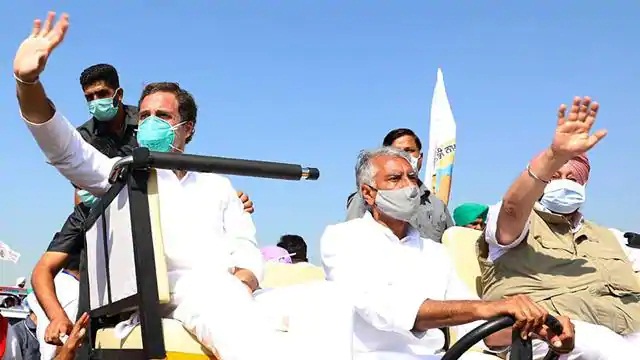 The Haryana unit of the Congress met in Delhi to take stock of the preparations for the visit of the former Congress president, in which party MLAs and senior leaders attended. Haryana Congress in-charge Vivek Bansal, State President Kumari Selja, Leader of Opposition Bhupinder Singh Hooda and senior leaders Kiran Chaudhary and Ajay Singh Yadav attended the meeting.

Shailaja said, Rahul Gandhi Yatra will prove to be a milestone in the farmers’ fight. On the first day, their rally will enter the Punjab border in Pihowa, Haryana. He will address a public meeting in Pihova. After this Rahul Gandhi will go to Kurukshetra and stay there one night. The next morning his journey will begin from Pipli Mandi, from where he will go to Neelokheri. After this he will go to Karnal, from where the tractor rally will start.

If the government is formed, we will throw the agricultural law in the trash: Rahul Gandhi has called
the agriculture laws brought by the central government as a fraud by farmers, former Congress president Rahul Gandhi. Rahul, who reached Punjab for a tractor rally against agricultural laws, addressed a public meeting on Sunday, saying that when the Congress comes to power, we will abolish these three black laws and throw them in the garbage cans. The ruling Congress in Punjab is holding tractor rallies across the state between October 4 and 6 against the new agricultural laws. After the public meeting, Rahul Gandhi sat on a tractor with Chief Minister Amarinder Singh, which was being driven by Punjab Congress chief Sunil Jakhar.