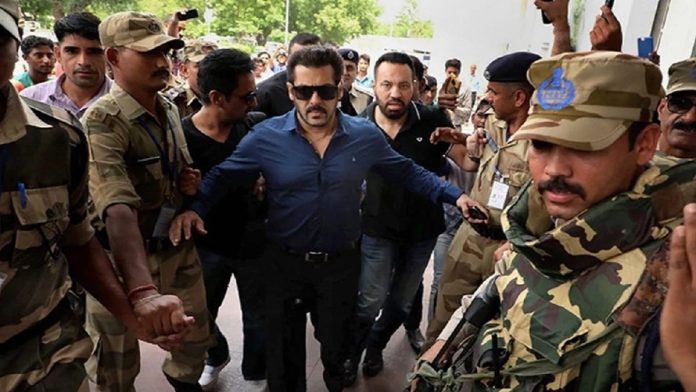 Salman Khan Security: Salman Khan’s Life Is In Danger, The Government Has Increased Security: The Maharashtra government has decided to provide ‘Y Plus’ grade security to actor Salman Khan, who has been facing recent threats by the Lawrence Bishnoi gang. It seems that the Maharashtra government has increased security for many Bollywood celebrities. It features Salman Khan, Akshay Kumar, Anupam Kher, and others. Among them, Salman Khan has faced threats from gangster Lawrence Bishnoi group. Salman Khan and his father Salim Khan received a threatening letter in June this year which created a stir. Actors Akshay Kumar and Anupam Kher have been given the ‘X’ category security.

It is noteworthy that the Bishnoi gang was responsible for the murder of young Punjabi singer Sidhu Moosewala. Later it is known that Mumbai Police arrested many members of Lawrence Bishnoi’s gang. It is reported that they revealed to the police during the investigation that Salman Khan was their target. With this, the Maharashtra government has decided to increase the existing security and give Y Plus security to Salman Khan. So far he has had only regular police protection. Salman is always guarded by four armed men in the Y Plus category. Also, it has decided to give X-category security to Akshay Kumar and Anupam Kher. X category security has three armed policemen on guard at all times.

It is known that recently a letter was received from unknown persons at his residence threatening Salman and his father. Police sources said that this letter was found on the bench where Salman sits after jogging every day. “Soon you will face a situation like Sidhu Moosewala,” the thugs threatened in the letter. The letter bears the letters GB and LB. As a result, the police suspected that those letters were a shortcut to the names of Goldie Brar and Lawrence Bishnoi. However, the police investigated whether this letter was sent by Bishnoi’s gang or if someone made threats in his name. It is known that the Delhi Police revealed that gangster Lawrence Bishnoi was the mastermind behind the murder of popular Punjabi singer Sidhu Mooswala. Siddesh Hiraman Kamle, a close associate of the main shooter in the Punjab singer Sidhu Moosewala murder case, has been arrested, Delhi Police said.

While there have been threats to kill Bollywood hero Salman in the past. Lawrence Bishnoi, who considers the black deer as divine, made sensational comments on the court premises that Salman, who was accused in the black deer hunting case, will be killed. To this extent, the police thwarted his gang’s plan to kill Salman. In this context, the Eknath Shinde-BJP government of Maharashtra has said that the state home department has decided to give ‘Y Plus’ to Salman Khan. Salman Khan has also had private security for years. His main guard Gurmeet Singh alias Shera shadowed him.