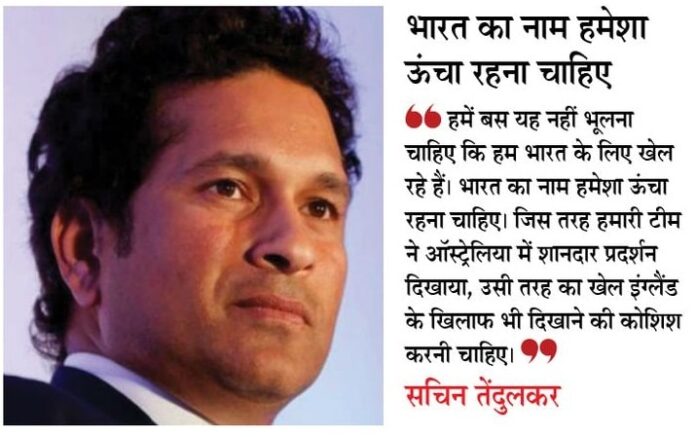 International cricket is returning to India after 10 months and 26 days due to Corona. The first match of the four-Test series between India and England has started in Chennai from today. On this occasion, Sachin Tendulkar, who scored the highest runs for Team India in the Test against England, had a special conversation with Bhaskar. Read Sachin’s answers on Bhaskar’s questions …

Question: After 10 months how interesting will it be to see Team India playing on home soil again?
Answer: It is very good news for India that international cricket is going to start again in the country. I look forward to a good series. I remember 2008 when I think of starting cricket again after such a long gap. After the Mumbai attack, cricket was stopped in the country for some time. After that when cricket returned again, we faced England in Chennai. This time also there is a match against England in Chennai. I pray to God that the result should be the same as it was in 2008. Then we beat England in the Chennai Test.

Question: If you compare India-Australia or India-Pakistan Cricket Rivalry, where do you rate India-England Rivalry?
Answer: Every Rivalry has its own importance. We should not just forget that we are playing for India. The name of India should remain elevated. Just as our team performed brilliantly in Australia, a similar game should be tried in the home series against England.

First day of first test between IND vs ENG, see scorecard and match report
Question: England is the only team that defeated Team India in a Test series in India in the last decade. So how challenging can this series be?
Answer: Every series is different and should be treated in a new way. What happened behind, it either gives confidence or reduces confidence. Currently both teams have won in the previous series. India has defeated Australia and England has defeated Sri Lanka. Confidence of both teams seems to be very high. It is very dangerous when the team is winning. I think both teams will play well. The balance of the Indian team is better than the England team, but England should not be taken lightly. He also has many good seniors and young players.

Question: Sachin, you are the highest scoring Indian against England in Test cricket. Whenever England’s team came to India, they used a new strategy against you. In 2001-02, Nasir Hussain tried the leg side theory against you. Will this strategy be seen against Virat or Rohit this time too?
Answer: Every international team plans against the top batsmen of the rival team. They try to stop the good batsmen or do not let them run for free. The England team will also come with complete planning on their part.

He must have tried to strategize against all Indian batsmen. Our batsmen should try and score big and have long partnerships when they are set. Test cricket runs session by session. Both teams will try to name the important session. What will be the planning of which team, it will be known as soon as the match starts. Although planning is necessary, but more important is to execute planning.

Question: Who will dominate this test series? Batsman or spinners? Can fast bowlers in Indian conditions also show something amazing?
Answer: In this series, batsmen and spinners can Dominate. Talking about fast bowlers, it depends on how much reverse swing is achieved. From 15 overs to 55 overs, reverse swing is more fatal. Between 55-60 overs and 80 overs, the ball becomes soft. So the batsman gets a little more time to adjust against the reverse swing.

Question: Is Day-Night the third Test match to be held in Motera? Will there be a dominance of 36 allouts in the minds of Indian players before landing in this match? The Adelaide Test was also a day-night.
Answer: Condition is affected in day-night test. Many times the ball moves more after the lights are on. If the grass is cool after dusk, it also has an effect. It is true that we lost the day-night test in Adelaide, but since then many things have been good for India. We won the Test series from Australia. When Team India starts playing Day-Night Test in Motera, the team will be more focused on how to win it. Overall I want the series to be good and the fans get to watch high quality cricket.