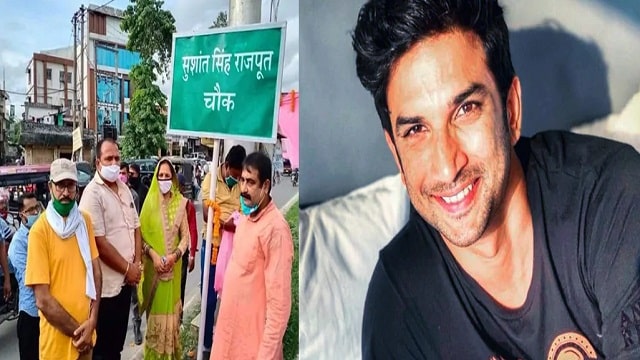 Almost a month after the death of actor Sushant Singh Rajput, the demand for justice for him continues among the fans of Sushant. Meanwhile, the road and chowk in Sushant’s hometown Purnia is named after Sushant Singh Rajput. Its pictures are also becoming viral on social media.

After the death of Sushant, the fans were paying tribute to him in their own way. The practice of naming the road in Purnea after the actor’s name was also fast. So now the city corporation in Purnea has changed the name of Ford Company Chowk to Sushant Singh Rajput Chowk.

Apart from this, a road has also been named as Sushant Singh Rajput Path. Fans have shared pictures of it on Twitter. In it, the Mayor of Purnia, Savita Devi is seen inaugurating the work.

Fans are expressing their happiness on social media by tweeting. Users say that this is a true tribute to Sushant. Users have also praised Purnia administration.

Let us tell you that on June 14, Sushant Singh Rajput had committed suicide in his house. After the post mortem, the cause of his death was stated in the report as suffocation.

After the actor’s death, there is a lot of debate in Bollywood about nepotism. People say that Sushant has been a victim of nepotism in Bollywood. He did not get the place in Bollywood that he deserved.

Sushant was also suffering from depression. For this, they were also taking medicine. Although he stopped taking the medicine some time ago. Many people also raised doubts that nepotism was the reason for the actor going into depression.

Many celebs, including the general public, have also demanded a CBI inquiry on Sushant’s death. Celebs also say that there is discrimination in the industry from artists coming from outside. They are not given quick work and are often replaced.

Significantly, Sushant’s movie Dil Bechara will be released soon. The film will be released on July 24 on Disney Hotstar. Dil Bechara, directed by Mukesh Chhabra, is Sushant’s last film. Fans had earlier demanded to release it in theaters, but in view of the current situation and to pay tribute to the actor, Mukesh Chhabra decided to release it on the digital platform.

Earlier, Sushant’s film Chichhore had made a tremendous amount. The film proved to be a blockbuster. Shraddha Kapoor was seen in the lead role along with Sushant in this film.