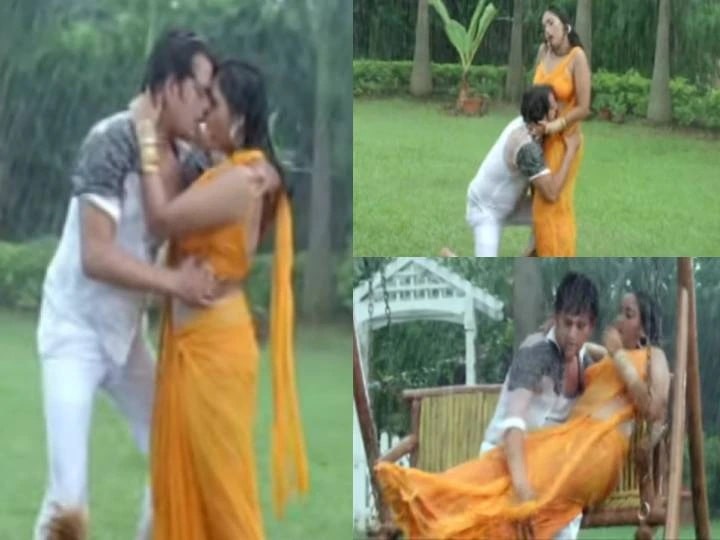 There was a time when BJP MP Ravi Kishan used to be a superstar of Bhojpuri cinema. She worked with big actresses like Nagma and Monalisa. Their pair also became superhit. But with Ravi Kishan, there was a lot of discussion about the pair of actress Rani Chatterjee, who is called Bhojpuri Industry Queen. The pair gave many superhit films.

One of these films is named ‘Jwala Mandi – Ek Prem Kahani’. A song of this Bhojpuri film is being seen and heard a lot on YouTube. The name of this song is ‘Rimjhim Barsela Sawan Ke Fuhar’ This song is very bold, Rani and Ravi’s sizzling and romantic chemistry is showing in it. Both are romancing soaked in rain.

In the song ‘Rimjhim Barsela Sawan Ke Fuhar’, Rani Chatterjee is wreaking havoc in a yellow light sari. While Ravi Kishan is getting drunk after seeing this boldness of Rani. These are the boldest songs of the Bhojpuri industry till date. This song has been sung by Kalpana, the star singer of Bhojpuri industry. Its lyrics have been written by Shyam Dehati while its music has been given by Rajesh Rajneesh.

See here this song of Ravi Kishan and Rani Chatterjee

Found over 54 Lakh Views
The song ‘Rimjhim Barsela Sawan Ke Fuhar’ Bhojpuri was launched on the YouTube channel of Venus Regional in July 2012. This song has been viewed more than 54 lakh times on YouTube alone. Bhojpuri-speaking and non-Bhojpuri people are also watching this song. Ravi Kishan and Rani Chatterjee are now popular among people living in places other than Bhojpuri region.