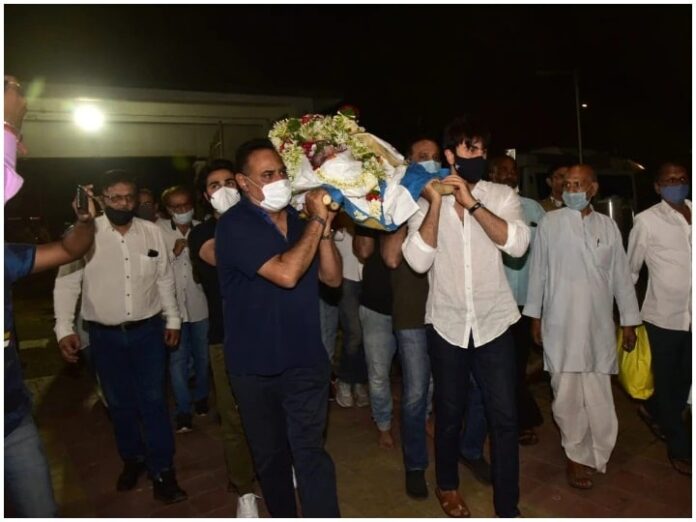 At around 6.45 pm, Rajiv Kapoor’s body was brought from the ‘Devnar Cottage’ to the crematorium in Chembur for the last rites. On this occasion, Ranbir Kapoor shouldered the dead body of his uncle Rajiv Kapoor brought from the ambulance and took him to the funeral home. Two more members of Ranbir’s family – Aadar Jain and Armaan Jain – also sided with his uncle. At the same time, Rajiv Kapoor’s elder brother Randhir Kapoor was seen walking in front of this funeral in a very inconsiderate manner.

Between 7.15 and 7.30 pm, the body of Rajiv Kapoor merged with the five elements. His corpse was cremated at the electric crematorium in Chembur, among select family members and close ones.

Shah Rukh Khan also reached ‘Deonar Cottage’ around 5.00 pm to console the Kapoor family. Shahrukh Khan was present there till the body of Rajiv Kapoor was taken from the ambulance and while carrying the body, he walked up to the ambulance and gave him a final farewell.

It is noteworthy that 58-year-old Rajeev Kapoor died on Tuesday afternoon after a heart attack. He was declared dead by doctors even before being admitted to Inlex Hospital in Chembur area.

Talking to ABP News, Randhir Kapoor had said, “After a heart attack at home, he was taken to Inlax Hospital in Chembur but he was declared dead before being admitted to the hospital. Sadly, we did not save him We are currently taking them home and they will be cremated at the crematorium in Chembur this evening itself. ”

REET 2021: Rajasthan board told the government, do not change the date of the writ test, this appeal to the candidates

AKTU: All engineering colleges in UP will be studying offline from April 1

UP: Private colleges of Jaunpur will be examined for recognition, fees,...