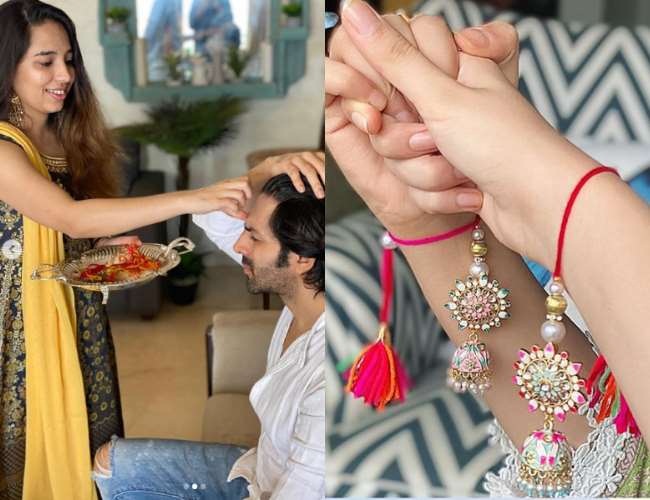 Actress Kriti Sanon celebrated Raksha Bandhan festival with her younger sister Nupur. Kriti tied a rakhi to Nupur and expressed her feelings by writing a post. Kriti wrote – I remember the time when you were held for the first time. Or I have cherished that memory in my mind in my own way. I felt that you are precious that I need to hold you properly very carefully. You have to be protected You have to see me laughing.

I remember the moment i held you for the first time.. or maybe I’ve just made my own version of that memory in my head.. I felt you were so precious that i needed to hold you correctly with utmost care and love.. Protect you, make you smile..giggle.. Never missed having a brother.. Because i knew i got my best friend for life..i knew you had the ability to make me smile in my lowest moments (and annoy me in seconds too!)🤪🙄 Love you Nups!! May you always laugh like a kid! You are my forever favourite and I’ll always have your back! No matter what! 💕👭😘🌸 @nupursanon #HappyRakhi

Kriti further wrote – Never missed a brother. Because I knew that I had found the best friend for a lifetime. I knew that you could make me laugh even in the worst of times. May God laugh like a child like you. You will always be my favorite. Come what may.

Nupur shared a photo of Rakhi tying Kriti and wrote that for a sister who protected me more than any brother. Congratulations to Raksha Bandhan.

Taapsee Pannu posted a picture of Rakhi with her younger sister Shagun Pannu and wrote – Because we also protect each other.

Karthik Aryan celebrated Raksha Bandhan with his sister Dr. Kritika Tiwari. Karthik has posted interesting pictures of the occasion, in one of which he is getting his sister vaccinated, while in the other one is touching the sister’s feet. With these pictures, Karthik wrote – When the sister is a doctor, then she is also responsible for the defense. Dr. Kritika is blessing me. Happy Raksha Bandhan to all.

Kareena Kapoor Khan has posted a photo of the family lunch on Raksha Bandhan, which also stars Saif Ali Khan, Ranbir Kapoor and Riddhima Kapoor along with the rest of the Kapoor family members.

The last couple of years have been extremely hectic for Harsh & I. Since both of us keep travelling constantly for work, we haven’t been able to spend quality time together. I miss the inside jokes we constantly crack and having long conversations at the dinner table while gorging on some delicious ghar ka khaana – which is made with love and @sunpridesunfloweroil. So guys, this Rakshabandhan, let’s celebrate the bond of sisters & brothers with an abundance of food and happy memories. #MyPrideOfGoodHealth #CookWithLove #SunprideSunflowerOil

Sonam Kapoor has missed Harsh by sharing an old picture with brother Harshvardhan and sister Riya. Sonam is in London these days.

Randeep Hooda has shared a photo of Rakhi with her sister Anjali Hooda, as well as a photo with Sarabjit’s sister Dalbir. Randeep played the title role in Sarabjit, while Aishwarya Rai Bachchan played Dalbir Kaur.

The protector of the realm😋 #rakshabandhan #lovemybhaibehen😘💕