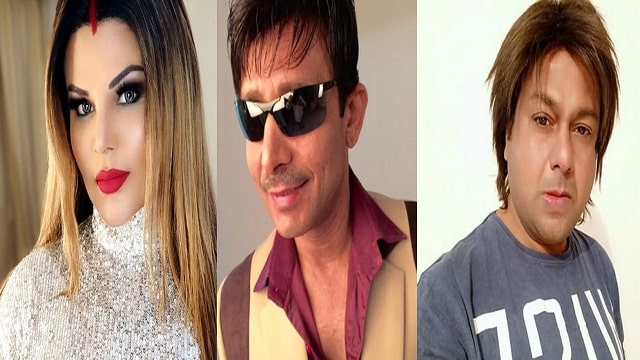 Every person entering the glamor industry is crazy about limelight and fame. They want to be in discussion with their work or statements. This shows their existence in the crowd of stars. But there are many faces who are unable to identify themselves on the basis of work. Later they have only one way to stay in disputes.

There are many celebs in the film and TV industry who remain in the headlines due to their controversial statements. These celebs are often targeted by trolls. Let’s know about such celebs.

First thing in this list is Kamal Rashid Khan. KRK, who describes himself as a film critic. In fact, he failed in every field like acting, writing, production. After this, he started making rhetoric against other celebs to stay in fame.

Because of this, they started being in the discussion. Now KRK started to get this formula. Even after the flop, he was getting the opportunity to be popular. They troll film-TV stars on their website, social media and YouTube channels. Abuse, make controversial statements. These days, he is in discussion about the Sushant Singh case.

Rakhi is also called Drama Queen. She does anything to get into publicity and limelight. Whether it is to make absurd statements, to do drama or to make strange videos. Rakhi made a lot of headlines by doing a wedding drama. Although their marriage is real or fake, people still doubt it.

Comedian Deepak Kalal is also the number one drummer. She also pretended to marry Rakhi Sawant for publicity. Later both of them spoke of a breakup. Deepak Kalal posts funny and bizarre videos on insta. They are trolled a lot. He also uses profane language along with abuses in the video.

Payal Rohatgi as an actress could not achieve a place in the industry. But now she is in the discussion about her nationalist and Hindutva-related statements. BJP’s supporter Payal takes on the people of the film industry along with other political parties. Due to controversial and inflammatory statements, Payal’s Twitter account has also been suspended many times.

Hindustani Bhau i.e. Vikas Pathak became an internet sensation due to his abusive videos. He is a popular YouTuber. Often, videos are made on India-Pakistan and nationalism issues and put on YouTube. There is a lot of abuse in his videos. They are also trolled for abusive language. Recently, Bhau targeted the project of Ekta Kapoor and Anushka Sharma. Some people also called it Bhau’s publicity stunt.

Model and actress Sofia Hayat did not get much recognition in the industry. After this, in 2016, Sophia decided to become a nun. But Sophia, who has become a nun, is often trolled for sharing her bold photos.