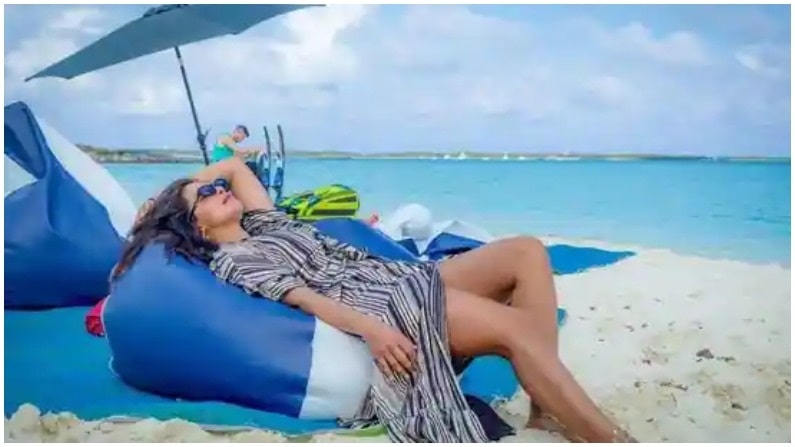 Priyanka Chopra) has made her acting iron from Bollywood to Hollywood. These days, the actress is in the news for her recent interview with Oprah Winfrey in the show Super Soul. In this interview, the actress has made many important revelations. Meanwhile, the actress has shared her glamor-laden photo on Instagram. As soon as the photo was shared by Priyanka, it is fast catching up on social media.

Priyanka Chopra is very active on social media. Priyanka keeps sharing photos and videos for fans on the day she arrives. Recently, Priyanka has shared a photo of her, which is middle.

The actress shared a throwback picture during her Bahamas vacation. Priyanka wrote in the caption, “Dream of a boat on an island #Throwback2019”. In this photo, the desi girl is seen resting on a bean bag on a quiet beach. During this, she is seen in a black and white shirt.

Along with this, the dress and just being seen chilling under the sun. This is what Nick Jonas is looking at while checking the surfing equipment in the background of the photo. This photo of Priyanka is fast becoming viral on social media. Fans are commenting on this photo in a different way.

Priyanka Chopra recently appeared on Oprah Winfrey’s show. During this, Priyanka spoke on many issues. She told that she respects all religions since childhood. The actress said, ‘I have studied in convent school and know about Christianity. My father used to sing in the mosque, so I am also aware of Islam. I grew up in a Hindu family, so I have full knowledge of it. Righteousness is a big part of India that you cannot ignore.

Priyanka said during this time that she had left a film because her director asked the actress to do a dance in which she was not comfortable. Priyanka told that she is sad that she did not reply to a director when she asked me to do wrong. He said, ‘I was scared at that time. I was new to the entertainment business, so that’s why I kept quiet at that time.

Nick was not ready before

Priyanka told that before meeting Nick, she had made a check list in which she had written what should be the quality of her future partner. Opra asked if there were quality, then Priyanka said, a person who is truthful, loves family, loves his job, understands business and finance and who is very confident. When she met Nick, Priyanka got all the quality in her.

Priyanka further told that earlier she was not ready to marry Nick. He told, ‘I was 35 when I met Nick and wanted to get married and have children. At the same time, Nick was young at that time. I did not know if Nick was ready for marriage or not. But when I met Nick, I was surprised. Nick was very sensitive and showed me a perfect partner in him.