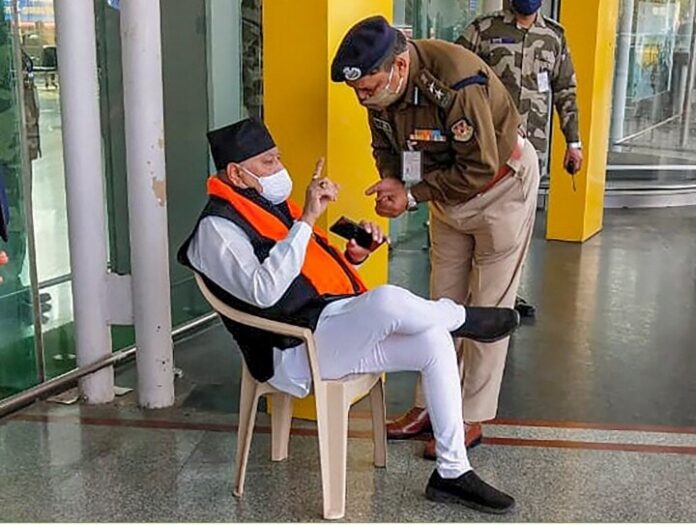 Lucknow: Prahlad Modi, brother of Prime Minister Narendra Modi, sat on a dharna at Amausi Airport on Wednesday to protest against his supporters allegedly stopping the police. Airport Assistant General Manager (Operations) Bhupendra Singh said that Prime Minister Modi’s brother Prahlad Modi reached Lucknow airport at about four in the evening on an Indigo flight, after which he sat on a dharna inside the airport complex.

Prahlad Modi said during the dharna “I came to Sultanpur program on the 4th, and then to social programs in Jaunpur and then Pratapgarh. After coming here I came to know that the workers who were coming to pick me up All have been caught by the Lucknow Police and have been seated in the police station. Efforts are on to register a case against them.

He said, “I felt that my children should be in jail and I should be free, that is not right. Either let them free, otherwise I have sat on a hunger strike at the airport. Some police officers came here and said that from the Prime Minister’s Office If the order is there, then I demand that I be given a copy of the order. By committing hooliganism neither the government here nor the Prime Minister’s Office will benefit. ”

With this, he said, “My program was going to start tomorrow but due to the problem of the police there has been some obstruction, but if the police does not give me a copy of the order, then I will go to the Supreme Court and show that there is justice in the country.” . ” Bhupendra Singh, assistant general manager (operations) of the airport, told that after leaving the picket for about one and a half hours, Modi left from there. Regarding the detention of people coming to welcome him, Sarojini Nagar Police Station Mahendra Singh said that he was not aware of any such incident. According to him, no such arrests have been made in his area nor has anyone been detained.

Mahendra Singh said, “I was definitely hearing something in Sultanpur, but I do not have the latest information about it.” On the question whether he knows where Prahlad Modi left the airport, Singh said “I have no such information. Even then, it is confidential.” On the other hand, Sultanpur Superintendent of Police Arvind Chaturvedi has also denied any such arrest.

However, the Sultanpur police on Monday arrested a young man named Jitendra Tiwari for cheating in the name of Prahlad Modi, brother of Prime Minister Modi. According to Kotwali city in-charge Bhupendra Singh, Tiwari was arrested by the police near Vikas Bhawan. The rear mirror of his car had a poster of the proposed program of Prime Minister’s younger brother Prahlad Modi on February 4 at Madhavpur, Guptarganj in Sultanpur district.

BJP district president RA Verma said that Tiwari met Prime Minister Narendra Modi’s brother four days ago and asked him to cooperate in the program. On this, he told him that he cannot cooperate till he receives any instructions from the state and national level of the party. Party people were also forbidden at the local level that no one would participate in such a program.