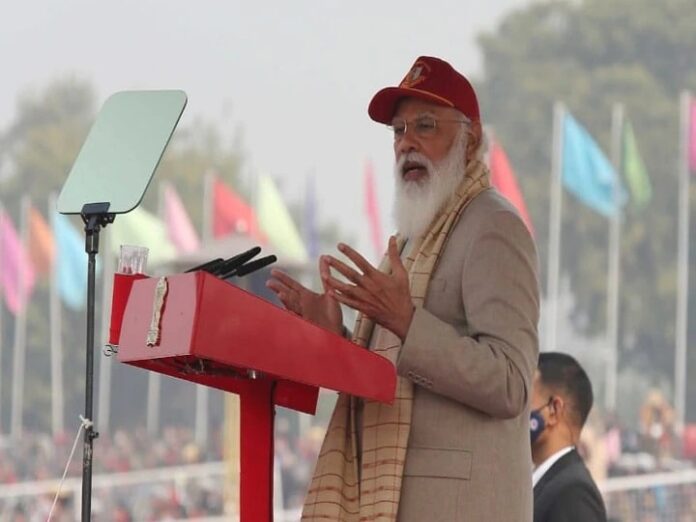 New Delhi: After the violence in the capital Delhi and insult of the tricolor on the Red Fort during the Kisan movement, Prime Minister Narendra Modi has said that disciplined society only advances in the world. Prime Minister Modi was addressing NCC cadets at Cariappa Ground in the capital Delhi. At the annual rally of the Neshwal Cadet Corps i.e. NCC, PM Modi said, ‘NCC cadets have all the qualities that our Constitution says about the obligations of our citizens. This is the reason that in the corona epidemic, the local administration needs help or there is no need, NCC cadets always go ahead and help.

PM Modi said that NCC cadets are known for their discipline but cadets should try to make people around them disciplined as well. The motto of NCC is ‘unity and discipline’. At the same time, this speech about the discipline of the PM has come when on the occasion of Republic Day, the miscreants involved in the peasant movement vandalized in the capital Delhi, beat policemen and insulted the tricolor on the ramparts of the Red Fort.

Calling PM Modi, the
PM said that you should become a national servant as well as a national servant. One lakh additional cadets will be prepared in coastal and border areas. During the PM’s rally, the cadets marched and organized a colorful program of patriotism. For the first time, Microlight Aircraft also performed. With this, paying tribute to Field Marshal KM Cariappa, the first Indian Chief of the Indian Army, on his birthday, the PM said that his life is full of many stories of valor and played a decisive role in the war of Pakistan in 1949.

PM Modi said that last year, whether it is a virus or a challenge of the border, India has succeeded on every front. Without naming China, he said that our missiles have defeated the spirits of the enemies. Referring to three more Rafales who arrived in India from France on Wednesday, the PM said that the capabilities of India’s forces (Army, Air Force and Navy) are continuously increasing. When Rafael arrived in India, he also thanked allies UAE, Saudi Arabia and Greece.