Contestant Paras Chhabra of ‘Bigg Boss 13′ is celebrating his birthday today. Paras was born on 11 July 1990 in Delhi. He did his schooling at Ryan International School in Delhi. Paras’ mother’s name is Ruby Chhabra and their father’s name is Vinay Chhabra. In Bigg Boss, Paras told that his father had passed away when he was three years old. After which his mother raised him. Paras lives with his mother.

After the father’s death, Paras had to leave his studies midway. After 11th she tried her hand at modeling and soon got an offer for a photoshoot. Paras started his TV career in 2012 with the show Splitsvilla 5 aired on MTV. He was the winner of this show. After this, Paras’ luck opened up and he started appearing in other shows. After Splitsvilla, Paras appeared alongside Sara Khan in V The Serial on Channel V.

In 2015, Paras once again took part in Splitsvilla. This time he came as a contestant in season eight. Paras debuted Serial on Badhon Bahu and Star Plus on & TV. His main serial stars Kaliran, Karna Sangini, Vighnakar Ganesh and Aghori. He was seen in the role of Ravana in Vighnakar Ganesh.

Apart from TV, Paras has appeared in the 2014 Bollywood film M3 Midsummer Midnight Mumbai. Paras Chhabra played the lead role in this film directed by Brij Bhushan. He was accompanied by Sara Khan, Kiran Kumar, and Milind in the lead roles.

After participating in Bigg Boss 13, Paras’ career gained a lot and he became popular overnight. While in the show, he was in the news for his ex-girlfriend Akanksha Puri. Paras’ proximity to Bigg Boss house grew with Mahira Sharma. After coming out of the house, he had a breakup with Akanksha. 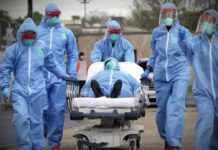 Explained: Why China Is Unable To Move Beyond Covid 19 Lockdowns, Corona Again In Dragon Country, Lockdown In Many Areas