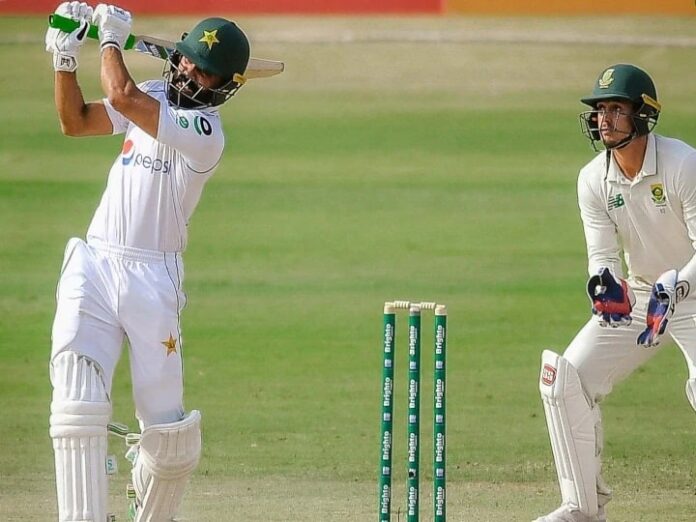 PAK vs SA: With the help of lower-order batsmen, Pakistan took a lead of 200 runs in their second innings against South Africa on the third day of the second and final Test on Saturday. All-rounder Fahim Ashraf and wicket-keeper batsman Mohammad Rizwan were caught off consecutive balls, after which both shared a 52-run partnership for the sixth wicket. By the end of the third day, Pakistan had scored 129 runs after losing six wickets.

At the time of stumps, Rizwan 28 and Hasan Ali were batting at zero. On the third day, spin all-rounder George Linde made South Africa return. He took three wickets for 12 runs with five maidens in 9 overs.

At one time Pakistan lost their five wickets for just 76 runs in their second innings. But after this, Faheem Ashraf and Mohammed Rizwan shared 52 runs for the sixth wicket to bring Pakistan back into the match.

Hassan Ali, who returned to five Test cricket after a two-year absence due to injuries, took five wickets for 54 runs, leaving South Africa on 201 runs. At the same time, Pakistan scored 272 runs in their first innings.

Half an hour after lunch, South Africa’s first innings was reduced, in which Hasan took three wickets and two players were run out. Temba Bavuma started playing ahead of 15 runs, he remained unbeaten after scoring 44 runs. Hasan finished the South African innings by taking the last two wickets off consecutive balls. South Africa started to play at 106 for four. Captain Quinton Dickock’s series continued with poor form and he could add only four runs to the night’s score of 24 and Shaheen was bowled by Afridi.

Bavuma and Vian Mulder (33) played a half-century partnership, batting for one and a half hours. But Pakistan took two wickets half an hour before lunch. Mulder was run out for a second run. George Linde was bowled clean by fast bowler Hasan Ali, he scored 21 runs. Hasan then bowled both Maharaj and number 11 Ennrique Nortje after lunch while Rabada was run out.

Butt was trapped leg before by Kagiso Rabada in Pakistan’s second innings. Butt, who made his Test debut in Karachi, could only score 36 runs in four innings. Abid also scored four, 10 and six runs in the last three Test innings. He was out on the ball of Keshav Maharaj.

Azhar Ali survived the lbw appeal of left-arm spinner Maharaj before tea, but he could not last long and reached the pavilion in the third season. Pakistan captain Babar Azam (13) was lbw to Maharaj for the third time in the series. Linde then lbw Azhar Ali and Fawad Alam dismissed Pakistan’s score for 76 for five. Faheem Ashraf hit three fours in Maharaj’s over but he became a victim of Linde.