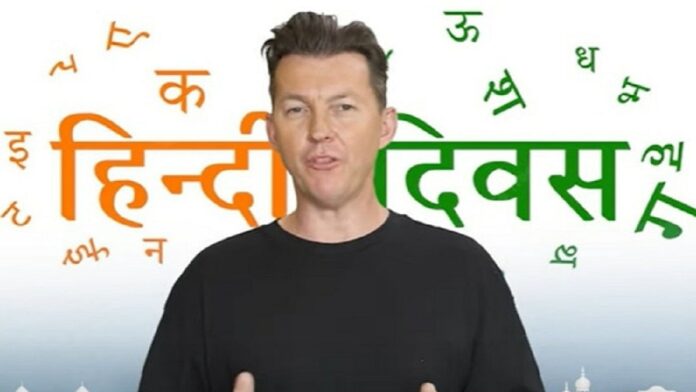 On Hindi Diwas Brett Lee Won Everyones Heart By Congratulating Him In A Different Way In Hindi Shared Atal Bihari Vajpayee Poem Watch Video: On the occasion of Hindi Diwas , former Australia fast bowler Brett Lee has congratulated all the fans of India by speaking in Hindi. Brett Lee has posted a video on his YouTube channel in which he is congratulating Indian fans for this in a special way. While Lee has congratulated all Indians for this special day by speaking in Hindi in the video, while the former cricketer has congratulated himself on this special day by reciting a poem by former Prime Minister of India Atal Bihari Vajpayee. Indian fans are also very fond of this gesture from the Australian festival bowler.

Posting the video, Brett Lee has written .. ‘Happy Hindi Diwas from my side to my dear Indian friends living all over the world’. Let us tell you that Hindi Divas is celebrated on 14 September every year in India.

On the other hand, Brett Lee keeps talking about cricket on his YouTube channel. Recently, the former bowler talked about Indian bowler Bhuvneshwar Kumar on YouTube channel and said that, he wants Bhuvi to bring some pace in his bowling in the T20 World Cup so that the batsman can read his ball. I had to face difficult situation.

He said, ‘I want more speed from Bhuvneshwar Kumar because I know how good he is. It is world class. I want Bhuvi to continue making sure that he can swing the ball from both the sides, keep his pace above 140 and if that happens, he will create a difficult situation for the batsman in front.

Let us tell you that the BCCI has announced the Indian team for the T20 World Cup. Bowlers like Bhuvneshwar Kumar, Jasprit Bumrah, Harshal Patel and Arshdeep Singh have been included in the Indian team.