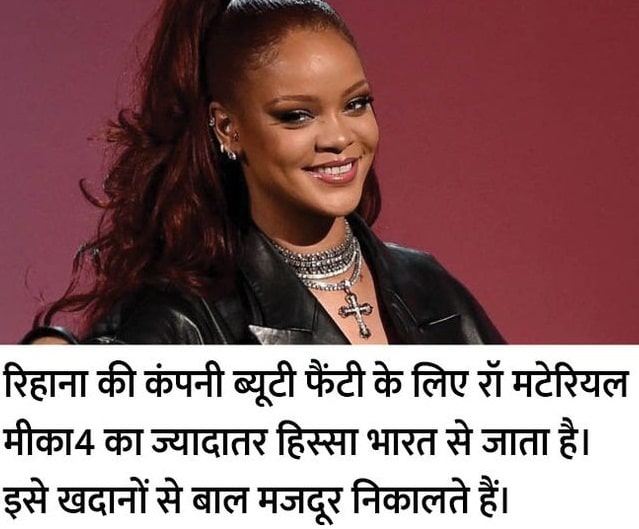 The American singer who questioned India about the peasant movement is now in many controversies. The first controversy is about posting in support of his farmer movement. Reports are claiming that he was given Rs 18 crore by a Canadian PR firm for this post, which is associated with a pro-Khalistan. The second controversy is about the product of his company Fanti Beauty. Most of the raw material required for this goes from India. It is claimed that the children of poor farmers of India extract this raw material by working in the mines. Rihanna engages in 3 controversies after post on Kisan agitation

1. Rihanna took money for
the post, according to The Print reported that the Canadian organization Poetic Justice Foundation (PJF) played a key role in starting a global campaign. It was supported by Canadian-based activists and politicians. According to the report, a PR firm named Sky Rocket gave Rihanna $ 2.5 million, or about Rs 18 crore, to post in support of the farmer movement.

The report also said that the tool kit that Sweden activist Greta Thunberg shared in her post was also passed on to them to carry out a big conspiracy to incite hatred against India.

According to reports, the director of the PR firm that owes Rihanna is Dhaliwal. It is also being said that Dhaliwal created the tool kit that Thanberg shared in his post. Dhaliwal is pro-Khalistan. She admitted this in a social media post in September last year. She wrote in the post, ‘I am a Khalistani. You would not know this, because Khalistan is an idea. Khalistan is a living and breathing movement. ‘

The dispute starts here. According to the report of IANS, Rihanna’s company, which is supporting the farmer movement, knows very well that child labor is done in the beauty industry. Most of the poor farmers have children in it. Rihanna’s company knows that the most important raw material for their beauty product is Mica 4 extracted from mines in India where children are laboring. The report states that Rihanna’s company, aware of all circumstances, is risking the lives of poor children by avoiding rules for profit.

Whereas, the rules regarding child labor are clear in California, USA. According to California’s Transparency in Supply Chain Act, retailers and manufacturers have to tell their customers what efforts they are making to prevent child labor (slavery) and human trafficking. The information has to be given on the website and companies which do not have a website have to tell it in writing.

Apart from this, a photo is also going viral on social media. In this, Rihanna is seen with Pakistan Prime Minister Imran Khan’s Assistant and Cabinet Minister Zulfi Bukhari. Social media users are commenting on this, now that it has come to know that why Rihanna is so worried about the farmer movement? Some people are also calling him Pakistani agent.

However, a photo of the viral post has been investigated by Bhaskar. In which this photo has been thrown. In this, Rihanna is seen in Pakistani flag. But, it has been revealed in the investigation that this photo was tweeted by ICC on 1 July 2019. Rihanna was seen carrying the flag of West Indies during the Sri Lankan and West Indies matches.

Rihanna’s post on Farmer Movement 2.20 Lakh Re-tweeted
Rihanna shared a news of American news channel CNN on social media on Tuesday night on the ongoing farmers movement in India. Rihanna wrote that why are we not talking about the peasant movement of India? Rihanna’s post with 11 crore Twitter followers was retweeted by 2.20 lakh people.