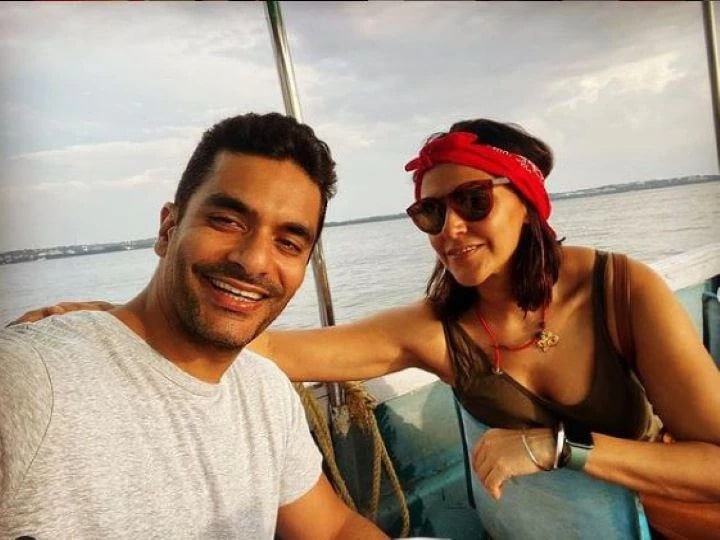 Neha Dhupia and Angad Bedi are Bollywood couples who pay great attention to their fitness and also do regular workouts. This power couple often uploads photos and videos of their workout sessions on social media. Recently, Neha Dhupia has shared a video of her workouts in the pool with her husband Angad on her Instagram account. In this video, Neha is doing exercise as well as having fun with her Mr. Husband.

The video clip of Neha doing a workout in the pool with her husband is quite short and in fastforward mode. In this clip, Neha and Angad are seen doing chordio. With the video, Neha wrote in the caption, “#Dont rush out with my man @ angadbedi and of course @mirandabrinston as well.” At the moment, the fans are very fond of this video of Neha and are also fiercely liking and commenting.

Neha and Angad married in 2018
Please tell that Neha is seen in a red color swimsuit in this video, while Angad Bedi is wearing a blue color swimming trunks. Significantly, Neha married Angad Bedi on 10 May 2018 at a gurdwara in Delhi. Both of them had dated each other for a long time. Before marriage, the two used to see each other only as friends. Angad went to Neha’s house and talked about marrying her parents. Nehar and Angad also have a loving daughter Meher Dhupia Bedi. Neha gave birth to a daughter on 18 November 2018. Neha often shares pictures of having fun with her Ladli on social media.

Neha busy in shooting for her upcoming film

As far as work is concerned, Neha recently told her fans about the shooting of her upcoming film. He wrote, “The day that changed everything, the shooting of A Thursday has begun. I am feeling very good by being a part of this project. Many good wishes to the team from me. ”