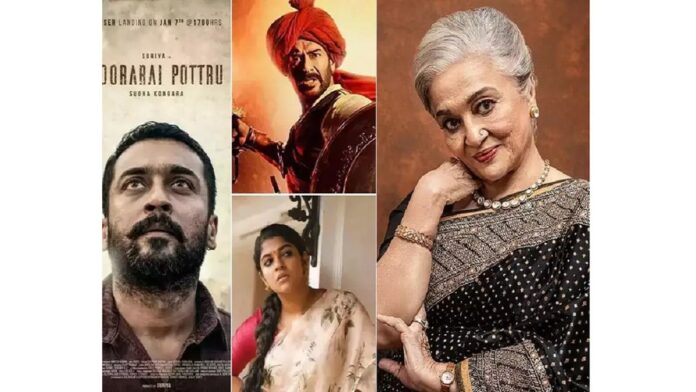 National Film Awards 2022 Winners: Ajay Devgn, Surya Best Actor Asha Parekh Dadasaheb Phalke Award: The day has come when the 68th National Film Awards are being given. On 30 September 2022, National Awards are being given to the celebrities of the film world in different categories. President Draupadi Murmu will felicitate all the film personalities with her own hands. The name of the winners for these awards is selected by a special jury. The 68th National Film Awards were announced in July this year. Actors Ajay Devgan and Suriya were selected for the Best Award. In this ceremony, famous actress Asha Parekh of the past will also be honored with the Dadasaheb Phalke Award. South films dominated this year’s National Awards. This time Suriya’s film ‘Soorarai Potaru’ has been given the Best Film Award. Let’s show the live event of the National Film Awards.
Amazon Diwali Sale – Up to 40% off on bestselling laptops.

These are being given for the National Awards 2020. This ceremony was postponed due to Corona and then the lockdown. Watch the live video of the 68th National Awards event here – Bollywood’s veteran actress Asha Parekh was honored with Dadasaheb Phalke Award Ajay Devgan received the National Film Award for Tanha Ji Best Actor – Suriya Very special photo

President #DroupadiMurmu presents the Dadasaheb Phalke Award for 2020 to #AshaParekh for her exemplary lifetime contribution to Indian Cinema at #68thNationalFilmAward in New Delhi pic.twitter.com/KFnEmgB2dK

President #DroupadiMurmu presents the best actor award to @Suriya_offl for the film #SooraraiPottru at 68th #NationalFilmAwards in New Delhi pic.twitter.com/awR0w5QAqN

Ceremony
When and Where to Watch 68th National Awards
The 68th National Film Awards will be telecast on FM Gold, Indraprastha, AIR Live News and AIR YouTube Channel. Many celebrities including Ajay Devgan, singer Aparna Balamurli, lyricist Manoj Muntashir, filmmaker Madhur Bhandarkar will be involved in this ceremony.