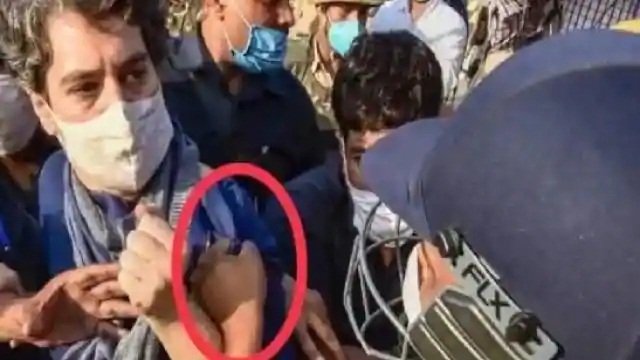 Shiv Sena leader Sanjay Raut made a tweet attacking Yogi Adityanath’s government in Uttar Pradesh. In fact, in the tweet, there was a picture of Congress leader Priyanka Gandhi going to meet the family of Hathras rape victim in which she is being stopped by male police by holding her kurta. Raut wrote with the photo- Is there not a woman police under Yogiji’s rule?

Former Congress president Rahul Gandhi and Priyanka had announced that they would visit the family of a 19-year-old rape victim Dalit woman. Explain that the girl was gang-raped by four men on 14 September and died after two weeks in a hospital in Delhi.

After their visit, both Congress leaders said that their party is standing with the family members of the Hathras gang-rape victim. Priyanka Gandhi consoled the victim’s mother and said that she would stand up against the injustice done to the family. He said after meeting the aggrieved family that the family could not see his daughter even for the last time. UP CM Yogi Adityanath should understand his responsibility. Until justice is found, we will continue this fight. ”

Rahul stayed with the family for more than an hour after reaching Hathras at 6.45 pm following a series of dramatic incidents including detention by UP police on Thursday based on violation of Section 144 and epidemic law. The Congress delegation was also stopped in the high-voltage drama.