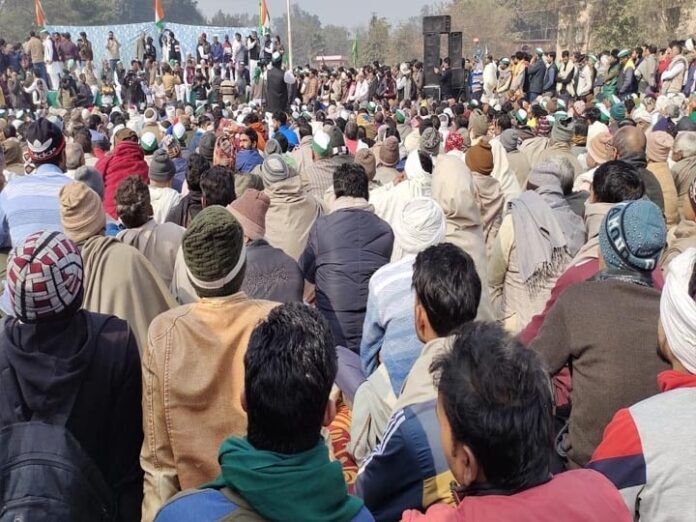 Muzaffarnagar: Thousands of farmers gathered in the Mahapanchayat under the banner of Bharatiya Kisan Union at Muzaffarnagar’s GIC Ground on Friday. In this mahapanchayat, leaders of many political parties also took part in the upsurge and upon seeing the crowd of farmers, they were also thrilled. But in this mahapanchayat, the last decision was taken by Naresh Tikait, the national president of the Indian Farmers Union. Along with Naresh Tikait, RLD Vice President Jayant Chaudhary was also present on this platform and together, he also announced to fight against the agricultural law, but Naresh Tikait clearly said that he was ready to end the movement but BJP People did not allow the movement to end.

Many political parties shared the stage

Thousands of farmers arrived at Muzaffarnagar’s GIC Ground today to join the Mahapanchayat. Seeing this crowd, many political parties also reached out to share the stage, and seeing the crowd of farmers, they targeted the state and central government fiercely. But the farmer leader Naresh Tikait present on the stage said that why this mahapanchayat was needed. You all know this, but we have to be careful. We have to conduct our movement in a peaceful manner. Because some people are also plotting to discredit our movement. At the same time, it was also said that if needed, the farmers will also travel to Delhi but today the farmers will not go to Delhi.

Let us tell you, leaders from Aam Aadmi Party to SP, BSP, Congress, RLD were involved in this mahapanchayat and all targeted fiercely against the state and central government. But farmer leader Rakesh Tikait clearly said that the government should not consider the farmer weak. If the Annadata can feed the nation by running a solution, then he can also fight for his rights.

At the same time, seeing the thousands of farmers who arrived in the district, the district administration was also fully prepared. Along with police and PAC jawans, senior officers also marched on foot and took stock of the situation.

Let us tell you, farmers of many districts of western Uttar Pradesh have joined this mahapanchayat, as well as farmers of Haryana and Punjab also came to join this mahapanchayat, but there was speculation that the farmers movement on the Ghazipur border If it ends, after this mahapanchayat, the movement does not seem to be over. Because now the farmers have announced to continue their agitation against the agricultural law. At the same time, it has also been made clear that if the administration commits coercion or vandalism with them, then they can also block the traffic.

At the same time, political parties who had come to join this mahapanchayat, while giving their support to Naresh Tikait, the national president of the Bharatiya Kisan Union, said that whenever he would be called, he would be seen standing with his body and heart.