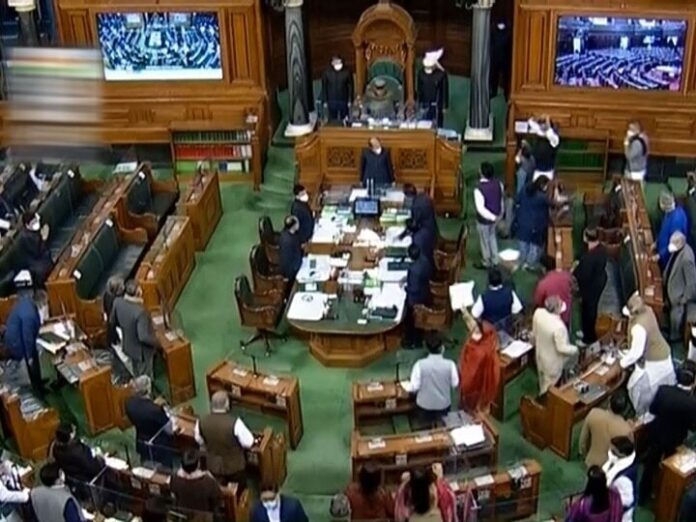 On Wednesday, members of opposition parties, including the Congress, created a huge uproar in the Lok Sabha, repeating the demand to withdraw the three new agricultural laws engulfed in controversies. Due to the noise of the opposition, the proceedings of the House of Nikhane were postponed for the entire day after four time adjournment. Parliamentary Affairs Minister Prahlad Joshi and Minister of State for Parliamentary Affairs Arjun Ram Meghwal said that they had agreed with the leaders of opposition parties to start discussing the motion of thanks on the President’s address but they are not implementing it.

Opposition members were raising the issue of demand for withdrawal of three agricultural laws and farmers’ agitation in many border areas of Delhi. Some opposition parties, including the Congress, demanded a separate discussion on the issue of farmers in the House before discussing the vote of thanks on the President’s address. Congress leader in the Lok Sabha, Adhir Ranjan Chaudhary said, “We respect the President.” We want the motion of thanks on the President’s address to be discussed, but the farmers’ issues should be discussed separately first.

He said, “We have to think about the farmers. We will continue to raise the voice of farmers inside and outside the House. ”Due to the uproar of opposition members, the Question Hour and Zero Hour proceedings could not be held in the Lok Sabha on Wednesday. Earlier, Lok Sabha Speaker Om Birla expressed his displeasure with opposition members who were protesting near the seat and said that they would have to take action on “violation of parliamentary norms”.

The noise continued throughout the day

At the same time, on the resuming of the proceedings at 9 o’clock in the night, Chairman Om Birla said that the time should be extended if the meeting is allowed. He asked the committing members to return to their seats. Birla said that Zero Hour is an important time. You have been selected and sent to discuss and communicate with the public. You are ending the dignity of Parliament.

He said, “You have not been sent to raise slogans and shout applause.” Minister of State for Parliamentary Affairs Arjun Ram Meghwal said that discussion on the motion of thanks on the President’s address is not interrupted. It is our constitutional obligation to thank the President on his address. He said that Parliamentary Affairs Minister Prahlad Joshi Ji and his leaders of opposition parties had talked in this regard and they should conduct themselves accordingly.

However, the noise of opposition members continued. Seeing that the system is not in place, the Speaker adjourned the proceedings of the House for the whole day. When the House met on Wednesday, Congress leader Adhir Ranjan Chaudhary requested Lok Sabha Speaker Om Birla to suspend the Question Hour and start discussion on the farmers’ issue first. Birla did not allow it and directed to run the Question Hour.

Meanwhile, some members of Congress, Trinamool Congress, DMK and Aam Aadmi Party MP Bhagwant Mann came near the asana shouting slogans. He was repeating his demand to withdraw the controversial agricultural laws. Expressing displeasure over the behavior of some members of the opposition, Speaker Birla said that some members violate parliamentary norms very much and they will have to take discipline action again and again.

However, slogans of members of opposition parties including Congress, Trinamool Congress, DMK and AAP continued, due to which Chairman Birla adjourned the proceedings till 4.30 pm. The situation remained as it was when the meeting resumed at 4.30 pm. However, Lok Sabha Speaker Om Birla started the Question Hour and Jagdambika Pal of BJP started asking questions.

Meanwhile, Congress leader Adhir Ranjan Chaudhary said that the members wanted that the vote of thanks on the President’s address and the issue of agricultural laws should be discussed separately in view of the seriousness of the issue related to farmers. Meanwhile, the Aam Aadmi Party came near Bhagwant Mann Asan and started shouting slogans against the controversial agricultural laws. He said that there has been a lot of discussion on this issue and now the law should be withdrawn. During this, Harsimrat Kaur Badal of the Akali Dal also went ahead of her seat and raised slogans with slogans in her hands.

Meanwhile, Speaker Birla urged all the members to go to his place and said, “I will give you ample opportunity to talk.” He said, “Bhagwant Man ji you want to discuss then go to your place. And follow the parliamentary norms otherwise action will have to be taken. ”However, the noise of opposition members continued. Seeing no uproar, the Speaker adjourned the house till 5 pm.

When the meeting of the house resumed at five o’clock, the Lok Sabha Speaker told the members shouting slogans, “For which you have been sent, you can take those issues of the public to the government through zero hours. I will give you enough time and opportunity in Zero Hour. Go to your seat. “Parliamentary Affairs Minister Prahlad Joshi said,” I had a discussion with the (opposition) leaders. It was agreed that discussion on the motion of thanks on the President’s address should be started. ”

Expressing disappointment over the uproar of opposition members, he said, “Why did you turn around, I don’t know.” It is also an insult to the President. Discussion should begin. ”However, seeing the noise and the noise did not stop, Chairman Birla adjourned the meeting till seven in the evening. Even after the meeting started at seven in the evening, the house had the same view as before. Members of the opposition parties were shouting slogans demanding withdrawal of the three agricultural laws engulfed in the disputes.

Presiding Chairman Meenakshi Lekhi shouted slogans and urged the members to go to their places. He said that the house is for discussion and all members will be given an opportunity to speak as per rules. Seeing no uproar, he adjourned the proceedings of the house till 9 pm.