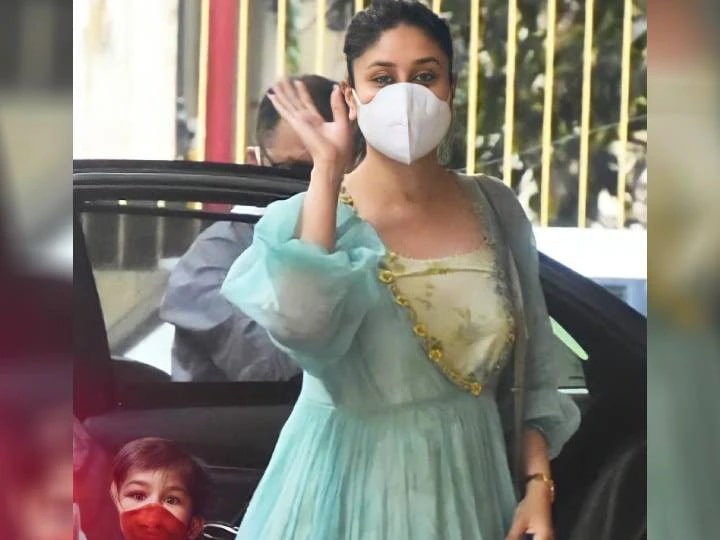 Kareena Kapoor Khan is unstoppable. She still surprises people with her beauty and fitness. Kareena Kapoor came out of the house after giving birth to another baby. During this time she appeared Gorgeous and Stunning as usual. A day before, she was spotted outside her sister Karishma Kapoor’s Mumbai home. He was accompanied by his son Taimur and mother Babita.

Kareena Kapoor wore a C-green color maxi dress, which had a balloon sleeve. He made a joke. She looked very beautiful in these outfits. She arrived here in a car. As he got down from the car, he thanked the paparazzi. During this time, Timur also got down from the car. But Timur became angry upon seeing paparazzi and shouted at him.

As Timur was going inside to scream, he hit the mirror and stood back again. Kareena shook her hand towards the media and looked at Timur’s forehead and then greeted the media again and went inside. Taimur Ali Khan was wearing a black T-shirt and jeans, while Kareena’s mother Babita also wore a top and jeans similar to the color of Kareena’s maxi dress.

During this time, all three were wearing masks. Along with him, his staff was also wearing masks. All three had arrived to wish Karishma Kapoor’s daughter Adhara on her 16th birthday. Kareena had also written a birthday note for Adabara on her instalary before going to her house and also shared a picture of Midnight Birthday Celebration.