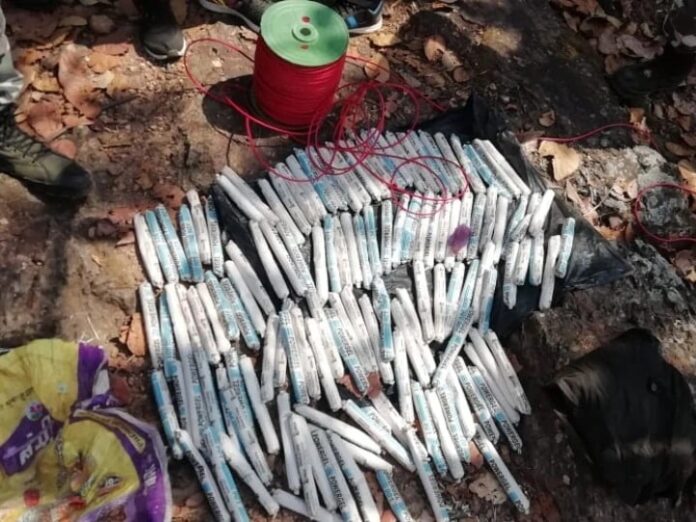 New Delhi: The National Investigation Agency (NIA) today recovered 100 meters of explosive wire and 126 gelatin sticks of 15 kilograms during a search of the dense forests of Korangburu hill under Khunti district of Jharkhand. The NIA made this recovery on the spotlight of the arrested cadre of CPI Maoist Naina alias Birsa Birhor alias Birsa Munda. According to the NIA, the CPI Maoists were going to use this explosive against the security forces and the explosive was hidden in dense forests so that the security forces could not see it. The Maoists were preparing to attack the security forces with this explosive.

A top NIA official said that the matter is related to the attack on the police party by CPI Maoist people in the year 2019. The attack was carried out by Maoist terrorists on June 14, 2019 at around 4:30 pm near Kukru Ghat in District Saraikila. During this time 5 policemen were killed and their arms and ammunition were also looted by Maoist terrorists. After this, an FIR was registered by the local police in the local police station Tiruldih and 11 people were arrested. Police had also filed two charge sheets against these 11 people before the court. Later, the case was handed over to the National Investigation Agency, or NIA, for investigation. The NIA started the investigation on the matter by filing a case on December 9, 2020.

According to the NIA top officer, during the investigation of the case, on the basis of a secret information, 5 more accused were arrested, who are said to be CPI Maoist terrorists. During interrogation of Naina, the accused arrested in this case, it was found that the Maoist militants had purchased a large amount of explosives and this explosive was hidden in the dense forest near the Korangburu hill of district Khunti. On the basis of the information, NIA officials carried out a search operation for several hours around the forest and hills with the help of local police and paramilitary force SSB. During this search operation, wire used in 100 meters explosive and 126 gelatin sticks of about 15 kg were recovered.

According to the NIA top officer, these two explosives can be used together as a dangerous bomb or ID and can cause massive damage through them. During interrogation, it was found that Maoist terrorists were going to use this explosive against the security forces and a big conspiracy was also being prepared for this. Now the NIA is the person who was the mastermind of this conspiracy and where the strings of this conspiracy were spread, to find out that the investigation of the case is going on.