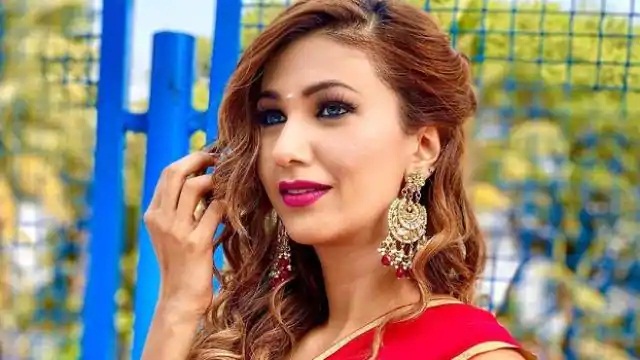 In Bigg Boss 12, Punjabi singer Jasleen Matharu made a lot of headlines for her relationship with Bhajan Samrat Anup Jalota. Now Jasleen is going to make her Bollywood debut with the movie ‘Woh Meri Student Hai’. The funny thing is that Jasleen, Anup Jalota will be seen once again in it. They have shared its poster.

Jasleen is very happy with the shooting of the film. While sharing the post, he wrote – ‘Hi final work started, shooting of my upcoming movie’ Woh Meri Student Hai ‘… with Anoop Jalota’.

In the poster, the title of the film can be seen to be justified. Where Jasleen is in student clothes, Anoop Jalota can be seen wearing bright clothes, lots of jewelry around his neck and holding a gun in his hand.

The most important thing in the photo is that they have held each other’s hands. In such a situation, the title of the film serves the story, it will be a thing to see.

Know that Jasleen and Anoop Jalota entertained a lot of people in the 12th season of Bigg Boss. Their entry was done as a couple in the house. Both kept showing fake relation in front of people throughout the show.

Jasleen is 37 years younger than Anoop Jalota. In such a situation, when the relationship of both was shown, people were shocked. Jasleen came into the discussion due to her relationship. However, after leaving the show, he removed the curtain from truth.

Both of them said that there is just a musical relation between them. Jasleen’s name has also been added with Shivashish Mishra and Mayur Verma. But both are only friends of Jasleen.

At the same time, the news of Jasleen’s real love-life was revealed in the lockdown. He told about his first meeting with cosmetic surgeon Abhinit Gupta in a conversation with Aaj Tak.

She told that she had gone to Bhopal to meet the starring boyfriend, which was her first meeting. Earlier both of them were in virtual contact with each other. Jasleen stayed there for 15 days and met the starring family.

Both also shot a song. Apart from this, Jasleen with Abhinit spent a very good time in Bhopal. The two traveled together as much as they could in Bhopal. On the question of marriage, Jasleen said that there is no plan regarding her marriage right now. It is now 2-3 years.