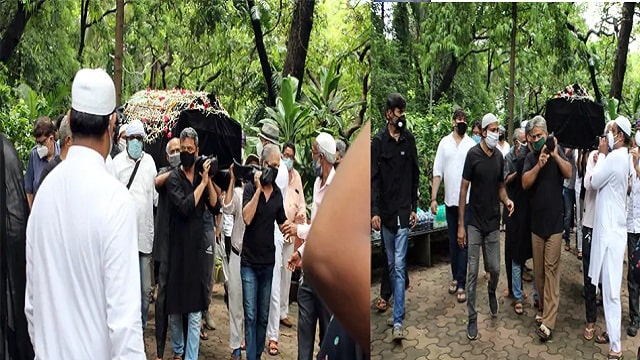 Bollywood’s famous actor and comedian Jagdeep passed away on Wednesday, July 8. Jagdeep breathed his last at his Mumbai home due to problems of old age. He was 81 years old. He was cremated in Mumbai.

Jagdeep’s son Javed Jaffrey and his close friends attended the funeral of Jagdeep. Jagdeep’s last rites were performed in the presence of family and close relatives in Mumbai.

In the picture, Javed Jafri was seen carrying his father’s funeral. His relatives and close people were seen with him. With this, both the sons of Javed Jaffrey also reached the funeral of grandfather.

Javed Jaffrey is accompanied by his wife Habiba, sons Mizan and Abbas. Apart from this, his brother Naved Jaffrey has also come to pay his last farewell to his father.

It is being told that Javed’s elder son Mizan Jaffery has arrived in Mumbai from Gujarat to attend Grandfather Jagdeep’s farewell.

Actor and comedian Johnny Lever reached out to support Javed and his family from Bollywood. Johnny and Javed have a very good friendship.

Jagdeep died on July 8 at 8.40 pm at his home in Mumbai. His real name was Syed Ishtiaq Ahmed Jafri.

Jagdeep worked in many big films in his career. He was seen in the role of Surma Bhopali in the famous 1975 film Sholay. This was his most popular character till now and he was known by this.

Jagdeep started his career in the film industry in 1951 with BR Chopra’s film ‘Afsana’. Jagdeep acted as a child artist in this film.

Even after this, he worked as a child artist in many films. These include the best films like Guru Dutt’s R Paar, Bimal Roy’s Do Bigha Zameen.

Not only this, his character of Surma Bhopali had become so famous that he himself made a film on it. This film was given a lot of love by cinema lovers.

Jagdeep used to be a big name in the Hindi film industry. His work in the film Hum Panchi Ek Dal Ke was highly appreciated by the people. Even former Prime Minister of India Pandit Jawaharlal Nehru praised Jagdeep.

Jagdeep achieved tremendous success in his career, but he kept his personal life away from the limelight. His work was praised, but he himself was rarely seen in the discussion about his life.

Like Jagdeep, his son Javed Jaffrey also entered Bollywood. Javed also won the hearts of the public with his acting and comedy. At the same time, his son Naved Jaffrey also tried his luck. Although he did not get much success.

There is a wave of mourning in Bollywood after Jagdeep left the world. Celebs like Ajay Devan, Anupam Kher, Johnny Lever, Randeep Hooda, Sanjay Mishra, Ritesh Deshmukh and Ayushman Khurana along with many have expressed grief over the tweet.