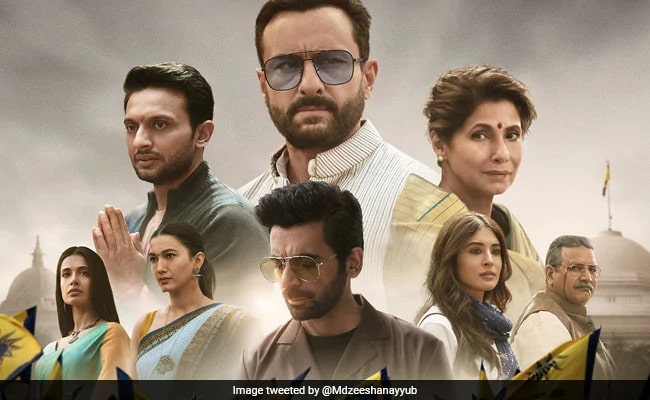 Bollywood actor Saif Ali Khan, Dimple Kapadia and Zeeshan Ayyub have been questioned by BJP MP Manoj Kotak and many leaders regarding the star Tandav series. Also accused of ridiculing Hindu Gods and Goddesses in the series. Some people are also being strongly opposed on social media about the series. In such a situation, the Ministry of Information and Broadcasting took cognizance of the complaints and sought clarification on this issue from the streaming platform Amazon Prime Video on Sunday. Sources have given information about this.

Ministry of Information and Broadcasting has taken cognisance of the complaints against web series #Tandav and has sought an explanation from Amazon Prime Video: Sources

A source in the ministry said, “The ministry has taken cognizance of the case (complaints) and has asked for an explanation from the Amazon Prime video.” At the same time, according to ANI’s tweet, the Ministry of Information and Broadcasting had also sent summons to officials of Amazon Prime Video in connection with the web series Tandav. Let us tell you that Saif Ali Khan, Dimple Kapadia, Sunil Grover, Tigmanshu Dhulia, Dino Morea, Kumud Mishra, Mohammad Zeeshan Ayyub, Gauhar Khan and Kritika Kamra Tandav premiered on the streaming platform on Friday. Filmmaker Ali Abbas Zafar, along with Himanshu Kishan Mehra, has produced and directed this film based on politics.

Amazon Prime Video officials in India summoned by the Information & Broadcasting Ministry, in connection with the controversy around web series 'Tandav'

At the same time, MP and Manoj Kotak from Mumbai North-East has alleged that such forums often attempt to show Hindu deities in a wrong way. He said that various organizations and individuals have complained that Hindu Gods and Goddesses have been ridiculed in the ‘Tandava’ web series. Kotak said, “Therefore, we have demanded from Javadekar ji and written a letter to him to immediately stop the web series. Actors, producers and directors should apologize for hurting the sentiments.” He shared a picture of the letter to Javadekar on Twitter, saying that there is no law or autonomous body that regulates digital content and films on such platforms are loaded with sex, violence, drug abuse, hatred and obscenity.

Apart from BJP MP Manoj Kotak, another leader and BJP MLA from Ghatkopar West Ram Kadam also asked the director to remove the part of the web series in which Lord Shiva is allegedly ridiculed. The MLA said that he has filed a complaint in this regard with the suburban Ghatkopar police station. When contacted about the complaints, Amazon Prime Video PR said the platform “will not respond to the case.”