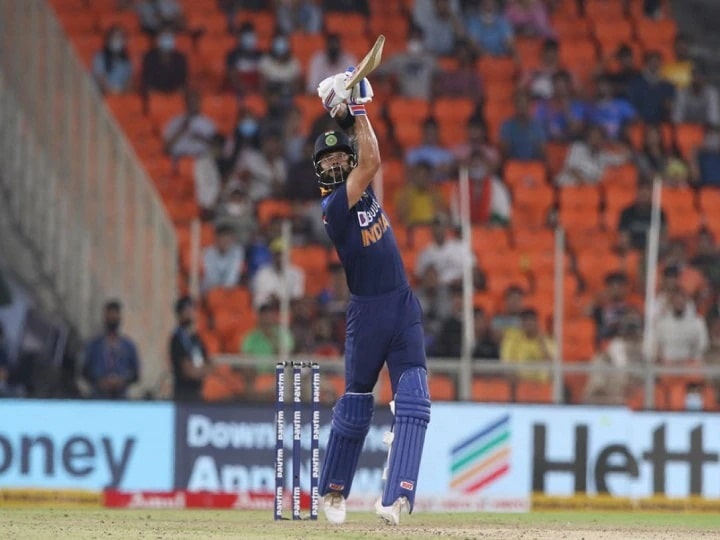 India vs England T20I Series: India defeated England by seven wickets in the second T20 match played at the Narendra Modi Cricket Stadium. India won the toss and bowled first to restrict England to 164 for six and then achieved the target by losing three wickets in 17.5 overs. Captain Virat Kohli (73 not out) and Ishaan Kishan (56), who made their debut matches, thanks to the brilliant half-centuries

With this victory, India achieved a 1–1 draw in the five-match T20 series. England defeated India by 8 wickets in the first T20 match. But India avenged the defeat of the first match by defeating England by 7 wickets in the second match itself.

Chasing the target of 165 runs, India had a poor start. KL Rahul returned to the pavilion without opening an account. But Ishaan Kishan completed his half-century in just 28 balls in his debut match. Ishaan shared a 94-run partnership for the second wicket with captain Kohli. Ishaan hit five fours and four sixes in 32 balls.

Virat Kohli finishes it off with a SIX!

Kohli hit five fours and three sixes in 49 balls. This is the 26th half-century of Kohli’s career. He has completed 3000 runs in T20 International matches. Apart from him, Rishabh Pant scored 26 runs from 13 balls. Shreyas Iyer scored eight not out off eight balls. For England, Sam Curran, Adil Rashid and Chris Jordan took one wicket each.

The third match of the five-match series between India and England will be played on 14 March at the Narendra Modi Stadium in Ahmedabad.