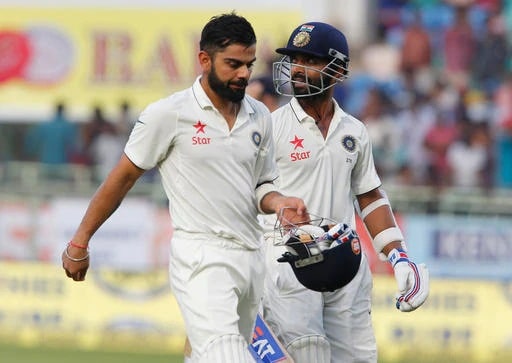 Indian vice-captain Ajinkya Rahane has said that he is happy to take the backseat and whenever the need arises, he is ready to help captain Virat Kohli. Kohli did not play in the last three Tests on the Australian tour and in his place Rahane took the captaincy of Team India and won the series 2–1. The Indian team will now play a four-match Test series with England under Kohli’s captaincy from Friday.

Rahane told the media on Wednesday, “My job is to take a backseat and help Virat whenever needed. Whenever he (Virat) needs my help, I will help him. When I am the vice-captain So I usually take a backseat. ”

He said, “There are a lot of things on the captain’s mind, so as a vice-captain, you have to imagine the conditions, think about what could happen in the game and prepare you if the captain asks you for suggestions.” Should be. My job is really easy. I take the backseat. Whenever he asks me about some things, I go and tell him. For me, whenever he is the captain, I usually take the backseat Am. ”

The vice-captain said, “Virat is the captain. He came back from Australia for family reasons. Basically he is the captain and I am the vice-captain. I am really happy that he is back. As a team we Are focused on playing with their strength. ” He admitted that batting back at number five needed a little adjustment.

He said, “A little bit of adjustment is needed. But I am batting well. It depends on what the team needs in that particular situation and to bat accordingly. Whatever the team needs, I will give my 100 percent Give.”