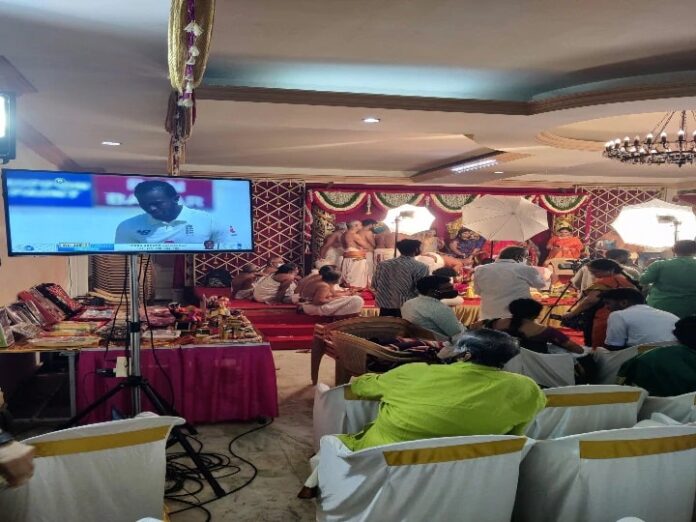 The Indian cricket team may have lost their first match against England played in Chennai, but the fan’s craze for watching cricket matches in the country is well known. These fans can do anything to watch the match. One such unique sight was seen from Tamil Nadu where this match played between India and England is being seen on the big screen during a wedding ceremony. Everyone involved in the ceremony is so lost in the match that the bride-groom and the wedding rituals are unnoticed. This picture has been shared by a person named Akshay Natarajan from his Twitter handle, in which he is congratulating his close friend. This picture is being liked by the people and it has become viral on the Internet.

This family of Tamil Nadu had arranged for their guests to show live on the big screen so that they could enjoy the match. Sharing this picture in his tweet, Akshay Natarajan wrote, “Test in Chennai, two boys from Chennai are batting. How can you miss it ?? Happy Married Life Anand Da.” Actually the picture is from India’s first innings in Chennai Test. In this, he means two boys from Chennai, Ashwin and Washington Sundar, who were sharing a wonderful partnership against England during that time.