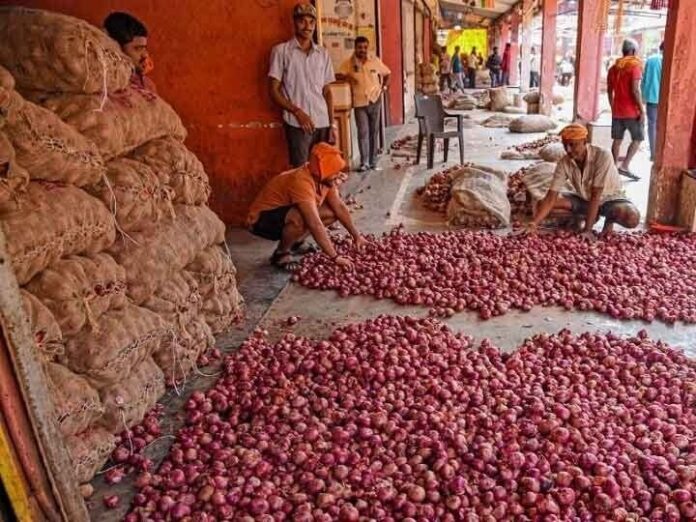 New Delhi: In the capital Delhi once again, onion prices are touching the sky and making the common man cry. In the last one or two days, the price of onion has gone up by four to five rupees.

On Wednesday, onion prices in Delhi’s biggest wholesale vegetable market Azadpur have been Rs 30-45 per kg. Alwar onion, which has the best quality, has reached 20-30 rupees per kg. At the same time, onions imported from Nashik and Gujarat are being sold for 35-45 rupees per kg.

If you talk about retail, then this price has increased to Rs 50-55 per kg in the markets. Mohammad Mustafa, who owns a vegetable shop in Jahangirpuri, says that the price of onion in bulk is increasing so fast that there is a problem in selling after buying from here.

Mustafa said, “Who will be able to buy 50 rupees onions. Customers are not buying, half the onion is rotting. We are suffering a lot. The borders are closed due to the agitation of farmers from above, due to which there is a lot of problem in carrying goods. This is also a reason for the price rise. Goods are not coming from behind, due to which inflation has increased. ”

At the same time, many crops were destroyed due to the weather. On Wednesday there was a shortage of onions in Azadpur mandi. Until two days ago, 70 trucks of onion were reaching Azadpur mandi, while on Wednesday only 40 trucks have been able to come.

Onion seller in Azadpur, Ratan Sharma says that onion prices are going to remain the same for a month. Can’t seem to get relief soon. Due to the weather, it took time to harvest. Now when MP’s onion arrives, only onion prices will be stable. There will be no relief till now.

Rattan onion is also considered as a reason for the increase in prices on Delhi’s ticking border which is near Azadpur. He says that the farmer is afraid to sell his crop, he is not ready to bring any goods from the border because he has to be jammed for many hours. The price in Nashik onion in Nashik is the same in Delhi, so that it can be understood that the traders of Mandi are suffering a huge loss because it also costs money to import, transportation costs. At this time we are not making a profit of one rupee.

At the same time, Deepak Raghuvani, who is an onion trader, says that in the last two days, onion prices have increased by Rs 5 and the number of trucks has decreased. Goods are not reaching from behind, due to which prices have jumped. People will get relief only from crops coming from Madhya Pradesh.

At the same time, ordinary people who are already suffering from the corona epidemic, now have to suffer from rising inflation. Customers who have come to buy vegetables say that now can not leave the onion plant due to rising inflation but have definitely reduced it. Where previously used to carry two kilos, now we are carrying half a kilo.

Recently, the budget has not given any special relief to the common man. The prices of petrol and diesel are also touching the sky, what will the middle-class family do. The rising prices of onions have affected the pocket of the common man. Prices have increased due to the weather. Now the proverb that used to say that poor people eat bread onion if nothing else has to be reconsidered because the price of onion has disappeared from the common man’s plate.