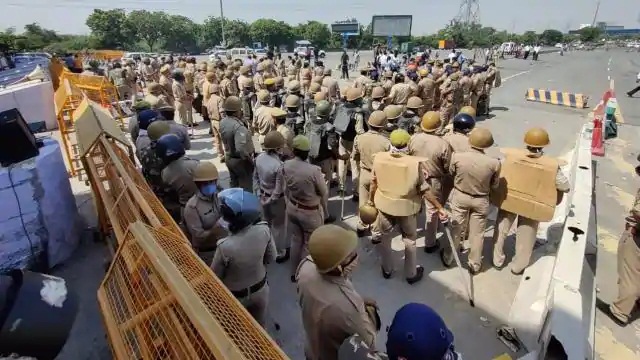 The Hathras case is in the headlines for the fourth consecutive day. Former Congress President Rahul Gandhi and General Secretary Priyanka Gandhi reached Hathras late in the evening to demand justice for the gang rape victim. The two leaders interacted with family members in the house amidst a huge crowd. Earlier, Rahul and Priyanka Gandhi had left for Hathras from DND amid tight security at Noida’s DND. From Noida, Rahul was allowed to come to Hathras with five people. As more crowds gathered there, the police had to resort to lathicharge to control them.

After meeting the family members of the gang rape victim, Congress leader Rahul Gandhi said that the voice of the victim’s family cannot suppress any power in the world.

– Where there will be injustice, we will go, no government can stop us from going.

Family wants security with judicial inquiry and action on DM

Until the afflicted family gets justice, we will keep fighting against injustice,

– Daughter misbehaved, will continue to stand with family: Rahul

– UP government’s responsibility to protect the victim’s family

– Priyanka said – The family was most sad that they were not even allowed to see the daughter’s face.

After meeting family members, Rahul said- It is the responsibility of the government to protect the victim’s family

Rahul and Priyanka talked to family for about an hour.

-The family became emotional after meeting Rahul-Priyanka, and told the whole sequence in a sequential manner

During the conversation, Priyanka remained constantly tied to the family.

– Rahul and Priyanka Gandhi are meeting with the victim family in Boolgarhi, only some relatives and Congress leaders are present with the family inside the house.

– Had met outside in the room due to the crowd at the seating arrangement.

– Large number of media and security personnel present outside the house

– Congress leaders Rahul Gandhi, Priyanka Gandhi Vadra and K.C. Venugopal stayed for a while at a restaurant in Mathura.

Amid tight security, the car of Congress leaders Rahul and Priyanka Gandhi left from DND to go to Hathras.

Lathi charge on Congress workers due to gathering of crowd even after Rahul and Priyanka were allowed to go to Hathras.

– Randeep Singh Surjewala said whether Rahul Gandhi or Priyanka Gandhi have committed any crime. Is it a sin to punish rapists? Is it a sin to send stalwarts to jail and demand strict punishment? Is it a sin for the victim’s family to plead for justice.

Seven people including Rahul and Priyanka Gandhi were allowed to visit Hathras. This was decided in the talks between Additional Commissioner of Police of Gautam Budh Nagar and Rahul Gandhi.

In view of Rahul Gandhi’s visit to Hathras, ADCP Ranvijay Singh of Noida said that Section 144 is being violated by Congress leaders. Police forces are deployed to control illegal public meetings. We are constantly appealing for peace. We try our best to understand this and return to our destination.

– Many Congress MPs and senior leaders of Congress including Randeep Surjewala, KC Venugopal, Ragini Nayak are moving towards DND on foot. Thousands of workers are also walking with party flags in their hands.

– Thousands of Congress and Youth Congress workers walking on DND with Hathras along with Rahul Gandhi’s convoy.

– Priyanka Gandhi herself is driving the vehicle leading the Congress convoy leaving for Hathras and Rahul Gandhi is sitting on the seat next to her. Congress MPs and leaders going along with him are following him in the bus.

– On the information of Congress leaders Rahul and Priyanka Gandhi leaving Delhi, the checking at UP Gate of Ghaziabad intensified. Traffic on the DND was completely halted due to the barricading by the police.

– Congress leaders Rahul Gandhi and Priyanka Gandhi left for Hathras with 37 MPs to meet the family of the gang rape victim of Hathras. During this, Priyanka Gandhi said that if we cannot get this time also, we will try again.

– Congress leader Ghulam Nabi Azad said – This incident of Hathras is not new for UP, it has become a daily routine for UP. It is not just the police who are responsible, the police is a part. It shows the leadership there and their mentality.

ACS Avnish Awasthi and DGP Hitesh Chandra Awasthi of Uttar Pradesh reached Hathras. The victims will meet the family and try to resolve the problem.

On Rahul Gandhi’s visit to Hathras today, Congress leader KC Venugopal said that our aim is only to meet the family and listen to their complaints.

– Due to barricading, the DND has been jammed. At the same time, vehicles are being allowed to go ahead after checking on the UP Gate flyover, so the speed of vehicles here is slow.

– Union Minister Smriti Irani held a press conference in Varanasi today and accused the Congress of doing politics in the Hathras case. Smriti said that Rahul Gandhi does not want justice for his daughter but wants to come to Hathras to do politics.

– Smriti Irani said that Rahul and Congress leaders should also visit Rajasthan once. He said that I have spoken to Yogi Adityanath and he has assured me to bring justice to the victim.

– The public is aware of the Congress strategy, so they ensured a historic victory for the BJP in the 2019 elections. People know that the journey of Rahul Gandhi Hathras is for his politics and not for the justice of the victim.

– Congress workers did not reach Noida’s DND. All reached Delhi from Noida. Workers will come to DND along with Rahul Gandhi.

– went enhanced security DND wake of Congress to meet the family of the victim of Hathras case Rahul Gandhi and other party leaders this afternoon again try to Hathras.

– On behalf of the administration, the media has now been allowed to visit the village of Hathras victim. The SDM of Hathras told that the investigation of SIT has been completed so there is no restriction on the media. Section 144 is still in force. Right now only the media is allowed to come.

– UP Congress chief Ajay Kumar Lallu said, ‘I have been placed under house arrest. What is the state government trying to hide? Whom does she want to avoid? Today women are insecure in Uttar Pradesh. There is anarchy in the state.

– The family said – We do not want a CBI inquiry, just the investigation should be correct.

– The victim’s sister-in-law said – We are all telling the truth, why our narco test?

– The victim’s family said – Here the leaders are coming to do their politics.

– Priyanka Gandhi tweeted: UP government is morally corrupt. The victim did not get treatment, did not write a complaint on time, burned the body forcibly, the family is in captivity, they are being pressurized – now they are being threatened that there will be a narco test. This behavior is not acceptable to the country. Stop bullying the victim’s family.

– Mayawati also tweeted: BSP supremo Mayawati has demanded a CBI investigation in the Hathras gangrape case. Mayawati tweeted, ‘There is tremendous resentment across the country about the Hathras heinous gangrape scandal. The public does not seem satisfied with its initial investigation report. This case should be investigated by the CBI or under the supervision of the Hon’ble Supreme Court, this demand of BSP.