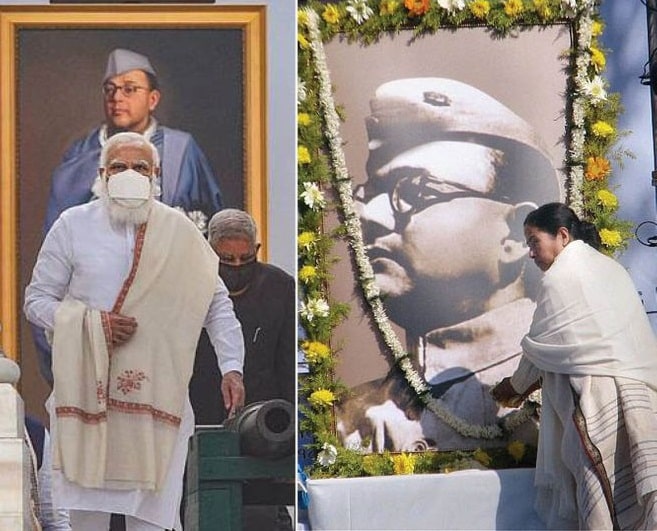 Assembly elections are to be held in April-May this year in West Bengal, Assam, Tamil Nadu, Kerala and Puducherry. Along with the governments here, the central government has also come into electoral mode. In Bengal, Mamata’s Trinamool government and the Modi government at the center are betting on Netaji Subhash Chandra Bose, while in Tamil Nadu, the AIADMK has announced a waiver of more than 16 lakh farmers. The tenure of the states where elections are due is to be completed between May and June. Know through which announcements governments are trying to turn the mandate to their side …

Major announcements in the name of Netaji

Name of 383 schools and 680 hostels of the country Netaji Subhash Chandra Bose Residential School: The Central Government has decided to rename 383 residential schools and 680 hostels in the country to be Netaji Subhash Chandra Bose Residential School. All these schools run under the overall education scheme of the Ministry of Education.
Opportunity for students to do internships in Defense Institutions: The Ministry of Education has offered to set up Chairs in five universities in the name of Netaji. The ministry is also working on a plan to provide military training to students. Currently, a six-month credit-based program is being prepared, in which all students will be given the opportunity to do internships by joining defense institutions or other security forces. At the same time, University Grants Commission (UGC) has also decided to prepare online study material on his life and period.
The train from which Netaji ran after dodging the British is named Netaji Express: The Ministry of Railways has named the Kalka Mail as Netaji Express. The Howrah-Kalka Mail is one of the oldest trains currently running. The Kalka Mail ran for the first time on 1 January 1866 and has been in service to the country for more than 150 years. At that time the name of this train was 63 UP Howrah Peshawar Express. On 18 January 1941, Netaji Subhash Chandra Bose had dodged the British and boarded the same train from Gomo Junction in Dhanbad district.
Mamta government will be
announced- New battalion in the name of Netaji, Bengal Chief Minister Mamata Banerjee on Friday announced the creation of a new battalion in the Kolkata Police in the name of Netaji. Its name will be Netaji Battalion. Earlier, on the 125th birth anniversary of Netaji, the Central Government celebrated Parakram Divas. Prime Minister Narendra Modi also participated in it. Mamta Banerjee had left her speech midway on the program and shouted slogans of Jai Shri Ram.

Tamil Nadu: Farmers ‘loan waiver of Rs 12,110
Tamil Nadu’s AIADMK government on Friday waived farmers’ loan of Rs 12110 from cooperative banks. This is considered to be a big bet of the AIADMK government before the assembly elections, as it will directly benefit 16.43 lakh farmers. Chief Minister K Palaniswami announced the implementation of the scheme with immediate effect.