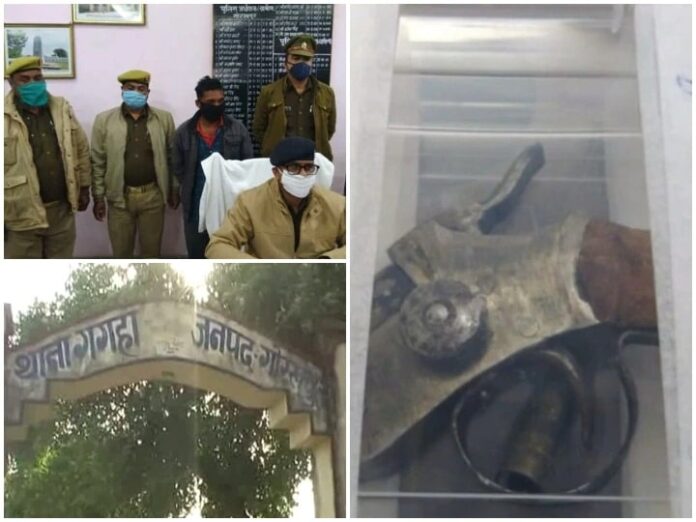 Lucknow: Gorakhpur police of Uttar Pradesh has got a huge success. Here the police has arrested a vicious criminal during the encounter, on which a reward of around 25 thousand was declared. The police have recovered the live cartridge along with it from it. At present, two accused have managed to escape during the encounter.

In fact, on November 11 last year, miscreants carried out the incident of looting at the brick-kiln in Sakri village of Gagaha police station area of ​​Gorakhpur. The miscreants attacked the night and robbed the workers and their families on the kiln by taking them hostage and molesting them. In which case, the police has already arrested 6 miscreants and sent them to jail.

On Friday, the Gagaha police arrested Chhotak, a resident of Ballia, during an encounter on the Kauriram bypass road from Chanwaria. 315 bore pistol alive and cartridges have been found from it. Two accused have managed to escape from the spot. The team is being searched by the police to search for them. It is being told that the arrested crook was involved in a loot on the brick-kiln in Sakri village.

In the SP South office of Gorakhpur, SP South AK Singh said that information was received through informant that three crooks were coming from Kowdiram. Which is involved in the robbery incident at the brick-kiln in Sakri village. On the information of the informer, he was arrested during an encounter with Chavariya elderly near Kauriram bypass.

The search for the accomplices of the accused continues

According to AK Singh, ‘a reward of 25 thousand has been declared on it. The captured crook has been identified as Chhotak, a resident of Kesarua in Sukhpura police station in Ballia district. Its two partners Virendra and Tender are still absconding. Those who will be arrested soon. The arresting team included Gagaha police station in-charge Raj Prakash Singh, Sub Inspector Principal Yadav Constable Dipu Kumar, Constable Nandlal, Constable Vijay Yadav Constable Vineet Kumar Yadav.