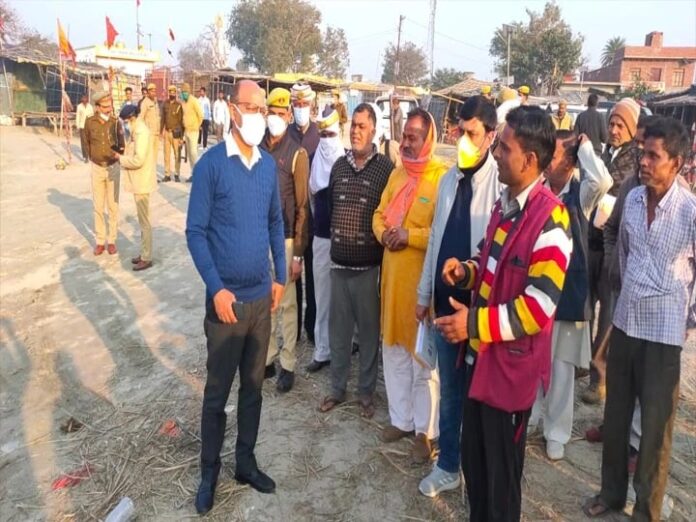 Amroha: Villagers living in 57 villages situated along the Ganges in Amroha in Uttar Pradesh have also been alerted. Constant announcements are being made to alert the temple, mosque dargahs, and farmers along the Ganges have been barred from going on their agricultural work till tomorrow. Heavy destruction is expected due to the bursting of glacier in Joshimath, Uttarakhand. Amroha District Officer Umesh Mishra visited the spot and asked the officials to be vigilant.

People are being alerted by making money

Let us tell you that, the administration of Amroha along the Ganga has instructed the farmers to return home by making Khadar profit. Melon, watermelon etc. crops have been sown in the Khadar region. On the banks of the Ganges, the farmers who are cultivating in Khadar also made a profit and told that the water is increasing rapidly, so the Ganga is not moving along the shore, it is moving at a fast pace. The Amroha administration has also issued an alert regarding water. Seeing this big incident, the heartbeat of the people of Khadar regions has increased. As soon as the information was received, the people of Khadar region started calling around here and appeared anxious to get back to the latest situation, although the administration has started reaching Khadar areas to take stock of the preparations. Irrigation department officials have also reached Ganga Tigri Ghat and District Officer Umesh Mishra SP Suniti has taken stock of the Khadar field coach with the team.

It is feared that the water level of the Ganges may rise at night. The villagers did not sleep in this situation. Police and administrative teams are being deployed in some villages, so that in case of emergency, the villagers can be taken to safer places.

Giving information, District Officer Umesh Mishra said that, because the dam is built near Amroha, it will not have a direct impact. Since some rural areas fall in the submergence area, people are being warned there, many teams have been employed for this, and they themselves are keeping an eye on, the pressure of the water flowing during this tragedy The day after tomorrow can be seen in Amroha district.