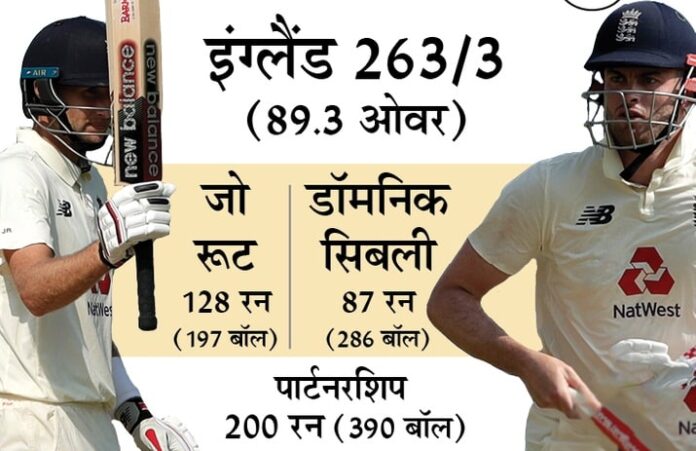 The first Test is being played in Chennai between India and England. By the end of the first day’s play, England scored 263 for 3 wickets. In the last over of the day (90th), Jaspreet Bumrah LBW to Dominic Sibli. He scored 87 runs. Captain Joe Root returned to an unbeaten pavilion after scoring 128 runs. Root made his 20th century of Test career. Click here to see the scorecard of the match …

This is Root’s 100th Test. He is the world’s 9th player and England’s third player to score a century in the 100th Test. He has scored a century in three consecutive Tests. He became the first player in the world to score centuries in the 98th, 99th and 100th Tests. Prior to the Chennai Test, Root scored two centuries against Sri Lanka in two Tests this month. He scored 228 runs in the first Test against Sri Lanka and 186 in the second Test.

Root and Sibli added 200 runs for the third wicket,
and Root and Sibli shared 200 runs for the third wicket to take England to a strong position. Sibli made her fourth fifty of the Test career. This was his second consecutive fifty. Earlier, he scored 56 runs in the second innings of the Gaul Test against Sri Lanka. For India, Bumrah got 2 and Ravichandran Ashwin got 1 wicket.

The player After how many Tests abroad, I played Test in my country
Jaspreet Bumrah 17
Javagal Srinath 12
RP Singh 11
Sachin Tendulkar 10
Ashish nehra 10
The third youngest player to
play the Root 100 Test is the 15th cricketer from England to play the Root 100 Test. He is the third youngest player to achieve this feat. The routes are currently 30 years 37 days. The record of playing 100 Tests at the youngest is named after former England captain Alastair Cook. He played the 100th Test at the age of 28 years 353 days.

The player Country Age at the time of 100th Test Year (of 100th Test)
Alastair Cook England 28 years 353 days 2013
Sachin Tendulkar India 29 years 134 days 2002
Which root England 30 years 37 days 2021
Mark boucher South Africa 30 years 39 days 2007
Gaba’s hero
landed with 3 spinners in this Test being played at the included Chepak Stadium not included in Team India . It included Ravichandran Ashwin, Washington Sundar and Shahbaz Nadeem. Whereas, Ishant Sharma returned to Team India after an injury. Team India suffered a setback before the toss. All-rounder Akshar Patel crashed out of the first Test due to a knee injury. 4 players from the team who won against Australia in Gaba Test are out of this Test. These players are Shardul Thakur, Mohammad Siraj, Mayank Agarwal and T. Natarajan.

Captain Virat Kohli returned to the Rohit-Kohli Indian team, playing 372 days later . He went on to paternity leave after the first Test against Australia. Rohit Sharma and Kohli are playing international cricket together after 372 days. The two players last landed in Hamilton in a T20 match against New Zealand on 29 January 2020.

Return of cricket
in India International cricket returned to India after 10 months and 26 days in India. The last international match in India was played between Ireland and Afghanistan on 10 March 2020 in Greater Noida. The Indian team returned to Australia after beating the Test series 2–1 at their home. At the same time, England’s team came to India by whitewashing Sri Lanka 2–0 at their home.

English team which could not win in Chepak for 35 years,
England team could not beat India for 35 years at MA Chidambaram Ground (Chepak). The English team last won in Chepauk in 1985. After this, India won 3 consecutive Tests against England at this ground. The last Test in Chepak between India and England was played in 2016. Then Team India defeated the English team by an innings and 75 runs. After 4 years both teams are once again face to face here.

Weather and Pitch Report
There is no chance of rain in the first test on all five days. The maximum temperature during the test can be 31 ° C and the minimum temperature 22 ° C.