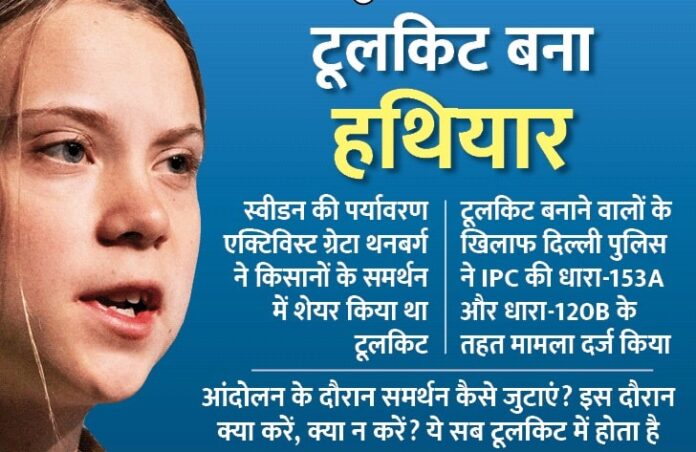 Sweden’s climate activist Greta Thunberg has been writing on social media in favor of the farmer movement in India for the last three days. On Wednesday, he wrote on social media in support of farmers. Also shared a toolkit document. Now the Delhi Police has registered an FIR against the creators of this toolkit. However, there was earlier news that the FIR has happened on Greta. It was later revealed that it was on the makers of the toolkit, the same toolkit that Greta shared.

After the Delhi Police’s FIR, Greta wrote again on social media that I am still standing with the farmers. No fear or threat can change this. What is the toolkit that Greta shared? Has this toolkit been used before? What is the meaning of the FIR lodged by Delhi Police? Let’s know …

What has Greta Thenberg done?

On Tuesday late night, Greta wrote on social media that we show solidarity towards the peasant movement of India. He then shared a document called Toolkit on social media late on Wednesday night. After a while they deleted it and shared the update toolkit. Controversy has increased due to this toolkit.

Now what is this toolkit?

The toolkit is a document in which to mobilize support on social media during the movement, what type of hashtag to use, where to contact if there are any problems during the demonstration? What to do and what to avoid during this time? This is all explained in this toolkit.

Has this kind of toolkit come into the discussion for the first time?

No. It’s not like that. In fact, last year in the US, a black was killed on the street by the police. After this, the ‘Black Life Matter’ campaign was started. People all over the world, including India, raised their voice in favor of black people. A toolkit was prepared by those who ran this movement.

In this, many things were told about the movement, such as – how to get into the movement, where to go, where not to go, what to do if you take police action? What kind of clothes to wear during the performance, so that ease of movement. What to do if the police gets caught What are your rights regarding this? Also in Hong Kong, the toolkit was shared in the ongoing movement against China.

Greta is a Swedish citizen, how can Delhi Police take action against her?

Faizan Mustafa, Vice Chancellor of NALSAR University of Law, says that this FIR has no meaning. You are making an FIR against a man who is not in India, but you cannot do anything against him. This is just the propaganda of the police.

Who is Greta Thunberg?

Greta Thunberg was born on 3 January 2003 in Stockholm, Sweden. His mother Malena Eman is an opera singer, while father Swante Thanberg is an actor. Greta’s grandfather S. Arhanius was a scientist. He gave a model on the greenhouse effect. He received the Nobel of Chemistry in 1903.
Greta, 18, has been working for climate change since she was 11 years old. Greta began demonstrating outside Sweden’s parliament every Friday to campaign for climate change. With this #FridaysForFuture, many countries of the world were associated with him. And thousands of children in the world, like Greta, are raising their voices against climate change.
His speech on climate change in the UN in 2019 was very popular. In this speech Greta criticized the leaders of the world. After his speech, in late 2019, Time magazine named him Person of the Year.
Apart from the environment, other issues have also been raised by Greta on social media. She is often in discussion about this. She has also been a target of former US President Donald Trump several times due to her activism.