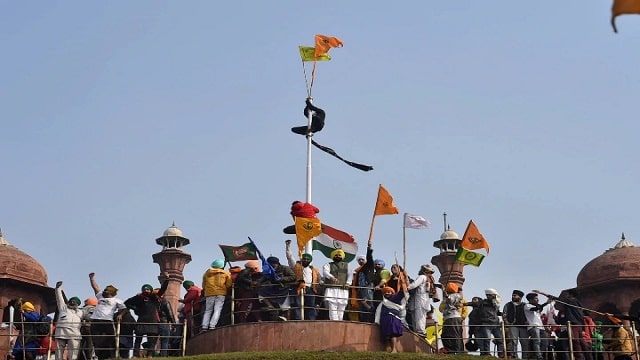 New Delhi: The agitation of farmers in protest against three new agricultural laws turned violent during the tractor rally today. Many farmers also entered the Red Fort complex and put up their flag. The police fired tear gas shells and lathicharge to control them.

There is all round condemnation of the incident in Red Fort. Union Minister of State for Tourism and Culture Prahlada Singh Patel said that the agitators should have stayed away from Lalikila.

He said, “The Red Fort is a symbol of the dignity of our democracy, the agitators should have stayed away from the Red Fort. I condemn the violation of this dignity. It is sad and unfortunate. ”

The Kisan United Front has also disassociated itself, condemning the violence. Also thanked the people who participated in the tractor rally.

There was a clash between the farmer and the police on the ITO in the middle of Delhi. The protesters were seen running with police poles in hand and policemen hitting their tractors. Angry farmers on ITO also vandalized a bus.

Explain that farmers are demanding withdrawal of three new agricultural laws. It has been against this for 62 days on the borders of Delhi. These farmers say that we will not move here until the law is withdrawn.

To end the deadlock, 11 rounds of meetings have been held between the farmer and the government. But the solution could not be found. The government is ready to amend the agricultural laws.