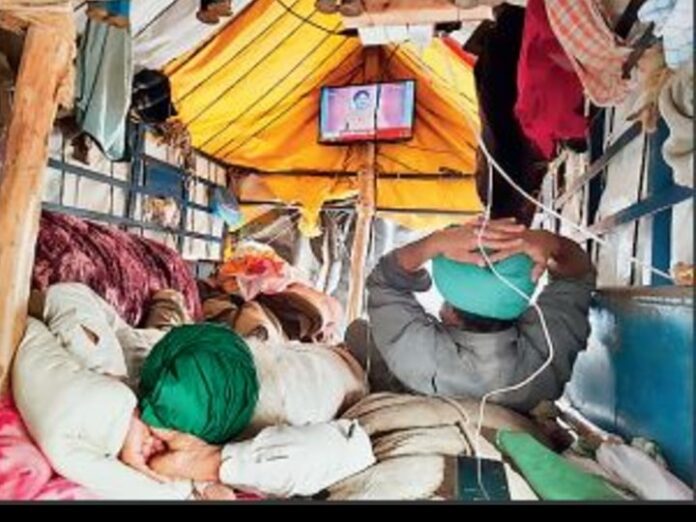 On Sunday, the farmer movement turned into a fair on the horoscope border between Haryana and Delhi on Sunday. Apart from villages in Haryana, more than 500 women from Punjab also arrived with children in different batches. The batch of farmers from about 28 villages of Sonipat, 23 villages of Panipat and about 17 villages of Jind reached here in full vigor by applying tricolor on tractors. Farmers arrived in around 800 tractors and other vehicles.

The emotional posters of his emotional tears are becoming viral amidst the preparations for Rakesh Tikait’s arrest on the Ghazipur border. After this, Haryana’s participation in the movement has increased now. A group of 27 women from Punjab Fatehgarh Sahib reached the Kundali border with children. The woman Gurupinder Kaur said that there was a problem of transport, so the women collected the money and settled it and reached here.

Gurupinder said that farmers first brought tractor-trolleys from the village, now they have arrived. Will stay here for several days and participate in the langar service. Harjeet Kaur said that the news has created an atmosphere of intimidation after January 26, but the farmers are fighting for their rights against the agricultural laws. In Punjab, every village is becoming profitable. Returned people are also returning.

In order to ensure that there is no criminal incident in the movement, the government has stopped mobile internet services for the last five days. Now farmers have started installing TV and dish along with phone calls to get information. Dish TVs are installed in many tractor-trolleys. Farmer Gurvindra Singh said that he has bought small TV.

Farmers who are
standing nearby also come to see here, due to mutual consent in the vicinity, farmers have also taken broadband passwords. At the same time, many have maintained their broadband connection without a password. After the Khapas and village-to-village panchayats, farmers in tractors and other vehicles are also reaching the movement in convoys.

Farmers from Kutani, Ugrakhedi, Nimbri of Panipat, Kharkharamji of Jind district, Gangoli, Gohana, Badkhalsa, Rai in Sonepat district, as well as from other areas brought ration to the tractor-trolleys. In the movement, slogans of Punjab-Haryana brotherhood unity were heard till a few days ago on the platform of United Kisan Morcha. Now Punjab, Haryana, UP farmer-laborers are raising slogans of brotherhood unity.