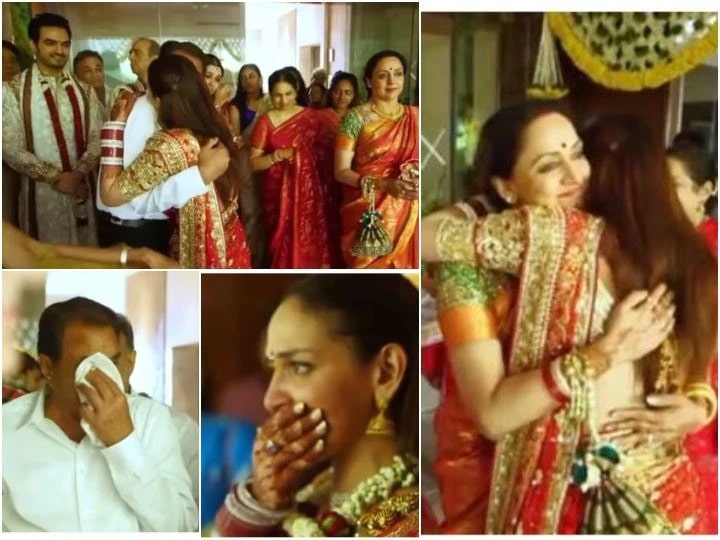 These days, a video is becoming very fast on social media. This video is the wedding video of Bollywood actress Esha Deol and businessman Bharat Takhtani in the year 2012. This video clip is of farewell ceremonies. Dharmendra and Hema Malini are completing the rituals to bid farewell to it.

In this one minute video, Isha and her younger sister Ahana were seen crying during the farewell ceremony. When the bride started crying, her relatives also started crying. Hema Malini, standing next to Isha Deol, also appeared emotional. However, she appeared to stop herself from crying. Isha then proceeded to hug Dharmendra.

As soon as Dharmendra and Isha Deol get a hug, tears start falling from the eyes of both. Amidst all this, Hema Malini’s face was seen with a smile, perhaps she did not want to cry in front of people. Isha hugs Hema Malini very loudly and is seen crying continuously while Hema is rubbing Isha’s back.

Interestingly, Isha Deol also told about the rude behavior of her mother Hema at her farewell ceremony in an episode of ‘Indian Idol 12’ last month. Hema Malini went on to become a guest on the show. Where the makers showed a video message of Isha to them. In this, Isha said that her mother was holding her tears in the farewell ceremony. Later, when she called her mother, she cried very loudly.