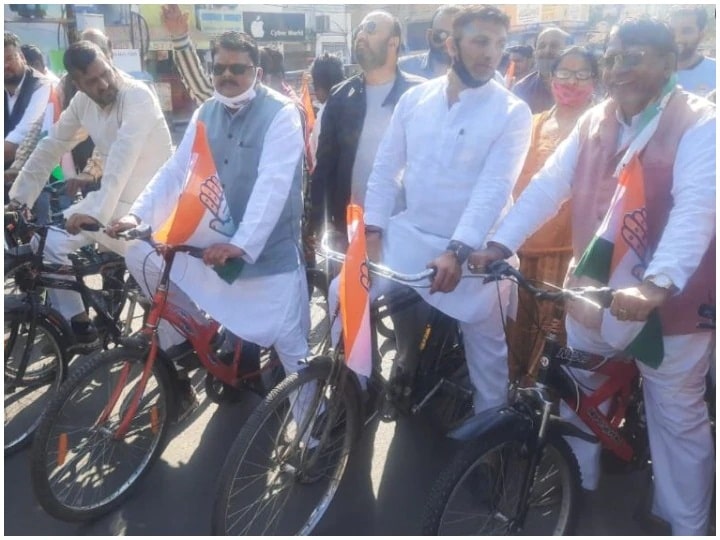 Bhopal: In protest against the rising prices of petrol and diesel in the country, the Congress MLA of the opposition party rushed to Madhya Pradesh Assembly premises riding on bicycles on Monday. The budget session of the assembly has started from Monday.

Congress MLAs PC Sharma, Jeetu Patwari, Kunal Chaudhary, Shashank Bhargava and Arif Masood rode from Bhopal’s Vyapam crossroads to the assembly premises in protest against rising fuel prices. Former state minister and senior Congress MLA Sharma told reporters that during the tenure of the previous UPA government, the prices of crude oil in the international market were almost double the current rates, but at that time the prices of petrol, diesel and gas in the country were low.

Congress MLA from Bhopal South-West Assembly seat, Sharma said, “Even now when the prices of crude oil are low in the international market, petrol and diesel are being sold in the country at a very high rate.” Seeking to reduce prices, Chief Minister Shivraj Singh Chauhan should also ride a bicycle now. Significantly, during the UPA government, Chief Minister Chauhan had registered a protest against the increase in petrol and diesel prices by riding a bicycle. Meanwhile, Madhya Pradesh medical education minister Vishwas Sarang claimed that the previous Congress government in the state had increased VAT on petrol and diesel.

The BJP leader told reporters here on Monday, “Congress MLAs have done this drama only to grab media attention.” If their protest is genuine then they should use bicycle every day. ”The budget session of Madhya Pradesh Vidhan Sabha is scheduled till March 26.