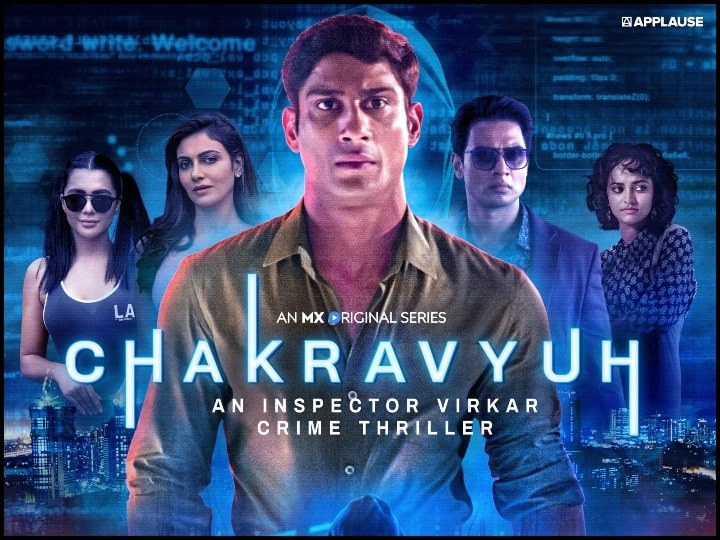 Chakravyuh Review: This is a thriller of new age. When there is nothing left from the eyes of the camera and intimate pictures of closed rooms and private videos are captured in it. These personal pictures and videos of the camera are leaked sometimes by mistake, sometimes by mischief and sometimes by conspiracy. Their big market has been created all over the world. You will find these leaked videos of the global world in the streets. There has been such a cycle of this business in which the trapped person cannot get out. The thriller of this cycle has been woven in the latest webseries on the OTT platform MX Player. Which not only shows the flattery of those trapped in it, but also brings out the crimes and criminals related to it.

Inspired by the author Piyush Jha’s English novel ‘Anti Social Network: An Inspector Veerakar Crime Thriller’, which came about seven years ago, this webseries has been brought by director Sajit Warrier. The story of Chakravyuh is interesting. Sagarika Purohit (Roohi Singh), a victim of loneliness in Mumbai, meets Raj, a young man, through a friend. With the help of social networking on mobile, ‘Intro’ takes Sagarika first to the club and then to the room where her sex video is made. It does not get leaked in social media, so it starts to blackmail. Meanwhile, Raj is killed and an entry is made in the story of Crime Branch Inspector Veerakar (Prateik Babbar). Before this case is resolved Sagarika disappears and a series of murders begins. Is Sagarika avenging her betrayal? As long as Virkar can establish this point, Sagarika’s corpse is exposed. It is known that there is a master mind, who is running the business of blackmailing the youth by ‘sexploiting’. It also emerges that this dirty business is not happening in Indian currency but in crypto currency.

Chakravyuh takes us to an unseen world. Where everything moves at a fast speed. Here is that virtual world created by the waves of the Internet, in which the youth of today is cluttered and constantly in the grip of many kinds of dangers. Here big fish are making easy hunting of small fish. Webseries move one after the other in fast pace. Drugs, alcohol, sex, hacking, darkweb, loneliness, depression and blackmailing are at the center. Whereas Inspector Virkar has the responsibility of battling alone with all these negative things. The problem with this is that his seniors are unhappy with Veerkar’s fast-paced work and the DCP issues an order to suspend him from the middle of the moving case. It is certain that even after this, the inspector does not give up the pursuit of criminals and manages to complete the mission.

Apart from Prateik Babbar, the director has made limited use of the rest of the cast. The role of Simran Kaur Mundi is definitely a bit elaborate but Shiva Pandit’s entry is quite late. Whereas the rest of the artists quickly get out of the story by disposing of their work. In this context, the speed of Chakravyuh remains constant and there is no stagnation. It is so important that under the pretext of Prateik Babbar’s character, nothing new has been shown in the police department’s internal tussle and the attitude of the officers. You have seen this in many stories before also. In the webseries here, it has become the practice to show heroes more often in love with the heroine rather than being free and engaged in relationships with different women. In the Chakravyuh too, the junior in the office who loves Prateek has a one-sided heart, while the hero establishes a relationship with the ‘matured woman’.

Prateek is a good actor and he has played his role well here. Simran Kaur Mundi, Ruhi Singh and Ashish Vidyarthi are also cast in their roles. Sajit Warrior keeps a hold on the story and this webseries with eight episodes of about half an hour does not get loose. This is definitely so that it could have been written better because there is a lot of detail already in the novel. In particular, there was a need to add something new to the functioning of the police department. The hard work done here would give a new color to the webseries.